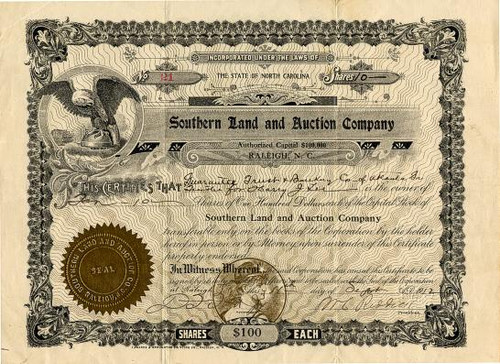 Beautiful certificate from the Southern Land and Auction Company issued in 1912. This historic document was printed by Edwards & Broughton Printing Company and has an ornate border around it with a vignette of an eagle. This item has the signatures of the Company's President, Wallace C. Riddick and Secretary and is over 96 years old. 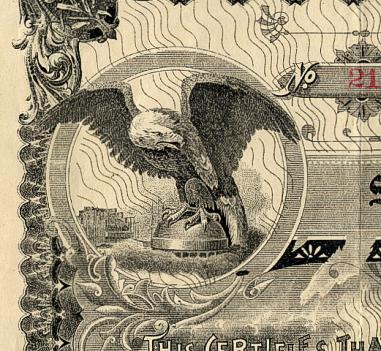 Certificate Vignette
Wallace Carl Riddick (1862-1942) Wallace Carl Riddick Dean of Engineering 1923-1937 Wallace Riddick was widely known as the "Father of Engineering in North Carolina," and some records refer to him also (but less frequently) as the Father of Engineering in the South. Born in Wake County on August 5, 1864, Wallace Riddick attended Wake Forest College and the University of North Carolina, where he received his bachelor of arts degree. He earned a degree in civil engineering at Lehigh University. He joined the faculty of the North Carolina College of Agriculture and Mechanic Arts in 1892 as professor of mechanics and applied mathematics. He became head of the Department of Civil Engineering in 1895, serving until 1908, when he was elected vice president of the college, and continued to teach civil engineering courses. In 1916 he was named president of the college. During his administration, he was instrumental in the reorganization of the college (whose name was changed to North Carolina State College of Agriculture and Engineering) into schools with deans in charge to accommodate rapid program expansion and increased enrollment. In 1923 he was named the first dean of the School of Engineering, following his expressed desire to take on this role. During his leadership the school grew to include 12 departments, and the Engineering Experiment Station was established. He retired in 1937, becoming dean emeritus of engineering and professor of hydraulics. Dean Riddick organized the North Carolina Society of Engineering and the Raleigh Engineers Club. In 1912 the State College football stadium was named in honor of Dean Riddick, who served as football coach in 1898 and 1899 and was for many years a member of the Athletics Council. In 1951 the Riddick Engineering Laboratories building was named in his memory. Dr. Riddick was affectionately known as "Pap" to hundreds of former and present students and was also thought of as the "Grand Old Man" of the College. He was much loved for his spirit of fair play and sense of humor and was respected for his learning and services to the institution. All of this was better said by the Class of 1917 when it dedicated the Agromeck to Wallace Carl Riddick in the following terms: "Teacher of men, wise administrator, friend of the student, and promoter of all things pertaining to the welfare of the college as a whole." History from North Carolina State University.