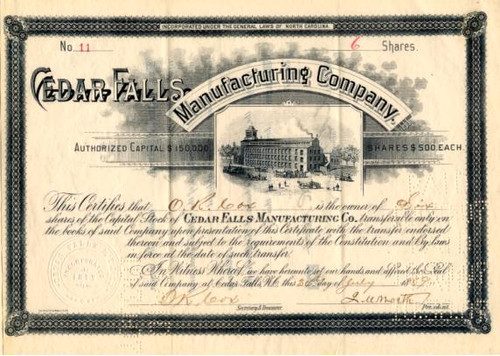 Beautifully engraved certificate from the Cedar Falls Manufacturing Company issued in 1896. This historic document has an ornate border around it with a vignette of an old factory building with horse drawn carts in front. This item is hand signed by the Company's President ( John Milton Worth ) and Secretary ( J. R. Cox ) and is over 109 years old. 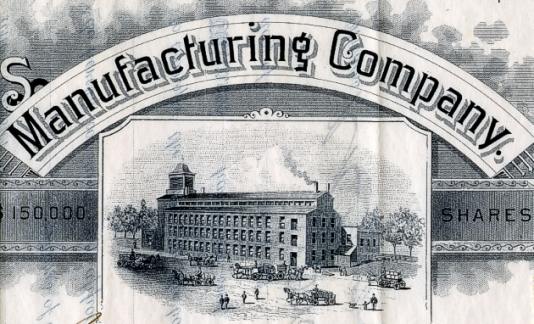 Certificate Vignette
John M. Worth - History from North Carolina State Website John Milton Worth was the younger brother of Jonathan Worth who served as Treasurer and Governor during the 1860s. John Worth served several terms in the State Senate, representing Moore and Montgomery Counties in the 1840s. Like his older brother, he was a Unionist or Anti-Secessionist, until the war broke out and then he became loyal to the southern cause, serving as commanding officer of the Sixth Reserves. In 1870, he was elected Senator from Randolph County. It was not a good time for the State. The Republican legislature of 1868 had looted the State treasury, authorizing some $16 million in bonds (later found to be fraudulent and repudiated) on top of previous debt equal to that sum, and Governor W. W. Holden had been impeached by the General Assembly and removed from office. When David Jenkins resigned before the end of his term, Governor Brogden named Worth to fill the unexpired term as Treasurer. He already had been elected to serve a four-year term in November. His name added strength to the ticket and is credited with helping the Democrats regain power in the State. As Treasurer, he faced up to the difficult task of settling the State's debt on a fair and equitable basis to both the bond holders and the citizens of the State. Worth was re-elected Treasurer in 1880, serving just over four more years. He served the State well, with honor, integrity and capability and was highly respected for his service. He is quoted as once commenting upon his guiding philosophy, saying, "My earnest wish has been to be useful to the State." After leaving public service, Worth became president of the Bank of Randolph and of the Southern Stock Mutual Fire Insurance Company. His Worth Manufacturing Company operated successful cotton mills in Worthville and Central Falls in Randolph County, not far from where the North Carolina Zoological Park is located today. By the time of his death in 1900 at age 90, he had become one of the State's wealthiest citizens. The Cedar Falls Manufacturing Company was a Cotton Manufacturing facility. The original plant was built on the north side of the river near the bridge, and the machinery was shipped by rail to Greensboro and hauled by horse-drawn wagons to Cedar Falls. Manufacturing did not begin until 1836. The lower mill, was the one-story part to the present plant, was not built until 1895-96. It was a cotton weaving plant and equipped with 100 looms. During the early years the only power available was waterpower from the river diverted into a raceway leading under the plant to a huge water wheel. The motion of the wheel was conveyed to the plant by a system of ropes and pulleys which were connected to looms by leather belts. The original company was established by an Act of the North Carolina General Assembly on the first day of February 1829, and was the first mill in Randolph County and one of the pioneer cotton mills in the south. Among the charter members of the new enterprise was Jonathan Worth, who later became Governor of North Carolina, and Jesse Walker, the great grandfather of T. Henry Redding and the great, great grandfather of C.W. McCrary, Jr., Steele Redding, and Mrs. John O Toledano. Jonathan Worth, 1802-1869, who was the son of David Worth of Guilford County, North Carolina. He studied law under Archibald D. Murphy, married Martitia Daniel, and started practicing law at Asheboro, North Carolina, in 1825. Worth was a member of the North Carolina state legislature in 1830, 1831, 1840, 1858, and 1860-1863, and was an unsuccessful candidate for Congress in 1841 and 1845. He opposed secession but accepted it after the fact, was public treasurer from 1863 to 1865 under the Confederate and then the Provisional government, and took office as governor under the Provisional government 28 December 1865. He was reelected in 1866 and continued in office until July 1868 when the government was suspended. He died 6 September 1869, leaving a widow, one son, and five daughters. The company was acquired in 1916 by three Asheboro businessmen, D.B. McCrary, T.H. Redding and W.J. Armfield, Jr.. The company was almost bankrupt at the time of the acquistion. They adopted the name of Sapona Cotton Mills, Inc., after an Indian tribe that had dwelled on the shores of the Deep River many years ago.