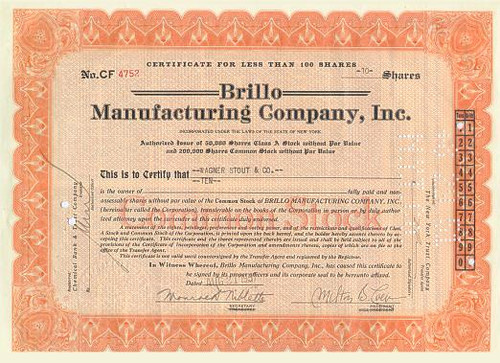 Beautifully engraved Certificate from the famous Brillo Manufacturing Company issued no later than the 1950's. This historic document has an ornate border around it with the company's name on top. This item is hand signed by the Company's President and Founder of the Brillo Pad, Milton B. Loeb and is over 50 years old. Credit for the commercial success of steel wool must goes Milton Loeb, a lawyer. He was approached by a costume jewellery maker who had come up with a mixture of soap and metal fibres to clean the then newly-fashionable aluminium pans. Loeb set up a company to manufacture the new product in the early part of this century, thought of the name "Brillo" and the rest is history. Andy Warhol is without doubt one of the great stars of modern art. A founding member of the radical pop-art movement of the early 1960's, Warhol was obsessed with the 'greatness of the mundane'. He chose as the subjects of his paintings common every day objects..simple things, like Campbell's soup tins, Coca-Cola bottles and Brillo boxes became monumental works of art. Andy Warhol was almost single-handedly responsible for blurring the lines between 'high' and 'low' art. He was a prolific painter,moviemaker and publisher.Andy Warhol and the pop art movement have made a lasting impression on the culture of the modern world. Some of the current Brillo Products include: BRILLO® Soap Pads If dried-on, baked-on food is soiling your pots, pans and oven, you need the heavy duty cleaning of BRILLO soap pads. They are specially designed steel wool, with a soap mixture plus the added cleaning power of ARM & HAMMER® Baking Soda. Choose from Regular or Lemon Fresh scent. And to get in those tight corners and hard to reach places, there's BRILLO Juniors. Use it once and toss it away! BRILLO® All-Purpose Cleaning Pads For scratchless cleaning all around your house try BRILLO All-Purpose Cleaning Pads. They scour without scratching, so they're perfect for non-stick coatings, shower doors, walls, countertops and china. BRILLO All-Purpose Cleaning Pads even contain an anti-microbial agent that prevents the growth of germs and odors in the pad. BRILLO® SUPREME® Steel Wool For heavy-duty cleaning, polishing, stripping and shining....both inside and outside your home, try BRILLO SUPREME Steel Wool. These steel wool balls are soap-free so you can use them with or without a cleaning agent. BRILLO® SUPREME® is more effective than sandpaper or other abrasives so they'll save you time around the house. Brillo was merged into Purex in 1962. It is now owned by CHURCH & DWIGHT.