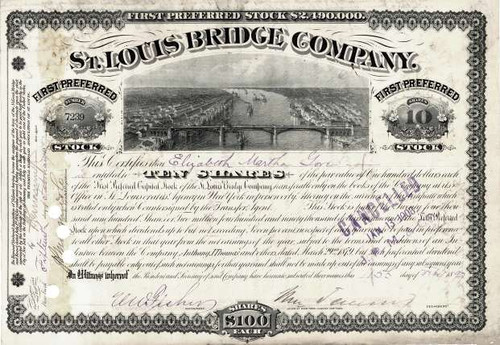 Beautifully engraved certificate from the St. Louis Bridge Company issued in 1891.. This historic document has an ornate border around it with a vignette of the Eads Bridge. This item is hand signed by the Company's President and Secretary and is over 102 years old. Minor ledger stain on left margin and cancellation hole top of vignette.

Certificate Vignette of Eads Bridge
Eads Bridge The St. Louis bridge, a massive structure, was completed in 1874 at a cost of over $10,000,000. It consists of three spans, the center one being 520 feet long, and the other two 500 feet each. The piers upon which these spans rest are built of limestone carried down to bed rock. The main passage for the accommodation of pedestrians is 54 feet wide, and below this are two lines of rails. The merchant's bridge, 3 miles N., was completed in 1890 at a cost of $3,000,000. The latter is used exclusively for railroad traffic. In 1874, Merchants' Exchange members formed a bridge company and financed the construction of the Eads Bridge, the first bridge to span the Mississippi and an engineering marvel in its time. Leaders of the Merchants' Exchange believed that the bridge was a sure-fire means for St. Louis to establish preeminence over Chicago for economic hegemony in the Midwest. In 1865 Andrew Carnegie left the Pennsylvania Railroad Company. Still a bachelor, he moved with his mother to a fashionable hotel in New York and began managing the affairs of the Keystone Bridge Company. It was in running Keystone that he crossed paths with James Eads. When Carnegie first heard of Eads' plans to build a bridge over the Mississippi River at St. Louis, he wanted Keystone to win the construction contract. Building the spectacular bridge would have tremendous promotional value for Keystone, helping the company win other large contracts. Keystone would also be in a position to make a tidy profit selling the bonds that would pay for construction. The relationship between Carnegie and Eads wasn't easy. After many increasingly antagonistic encounters between Eads and Keystone, Carnegie wrote: "Of all men, your man of real, decided genius is the most difficult to deal with practically." His chief complaint was Eads' demand for steel of unprecedented quality. "The St. Louis Bridge is one out of a hundred to Keystone while to Captain Eads it is the grand work of a distinguished life. With all the pride of a Mother for her first born, he would bedeck the darling without much regard to his own or others' cost." During the seven years of construction, there were times when Carnegie doubted it would ever be completed. In 1871, six months after the bridge was supposed to be finished, but before construction on the superstructure had even really gotten underway, Carnegie sold his stock in the St. Louis Bridge. "I am disgusted with the affair, throughout, & may have sold at panic prices..." he wrote. Eads didn't like Carnegie much either. He was convinced that Carnegie, as a major stockholder in the St. Louis Bridge Company, and as the chief spokesman for both Keystone and the subcontractor that supplied the iron for the bridge, was trying to milk the deal for all he could. But despite the difficulties between the two sides, and the many delays and cost overruns, Carnegie marveled at the bridge when it was finally completed. In December 1873, he wrote to a financier in Europe that "the entire work -- bridge, tunnel & approaches, are magnificent." The Eads bridge was Carnegie's first involvement in a major structural steel project. The rest of his career would revolve around producing the metal. In 1875 Carnegie opened the J. Edgar Thomson Steel Works in Braddock, Pennsylvania, using the Bessemer steel-making process he had first seen at work during trips to England. Efficiency became Carnegie's motto. He introduced every cost-cutting innovation available. By 1900 his plants were producing more steel than the whole of Great Britain.