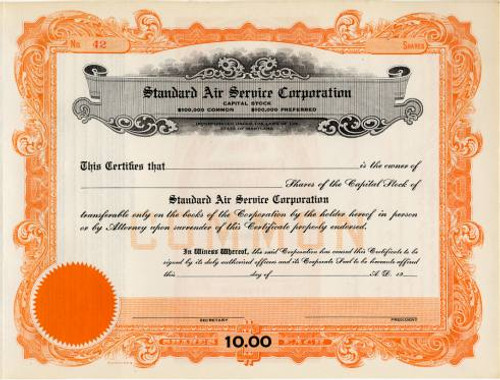 Beautiful unissued certificate from the Standard Air Service Corporation printed in 1945. This historic document has an ornate border around it with the company's name on top center.

Certificate Vignette
This historic document has an ornate border around it with the company's name on top center. This item has the signatures of the Company's President, Robert E. Whipp and Secretary, Mildred Gibson Wright. The certificate was issued to John Winthrop Wright and Mildred Gibson Wright and endorsed by them on the back. The certificate was attached to the ledger page by tape on the left side when it was redeemed. The Standard Air Service Corporation was a flying school operated by Robert E. Whipp located in the Country Club Estates section of Glen Burnie, Maryland. In 1940, Mr. Whipp developed an airport and flying school with 27 planes, six instructors and 6 mechanics. It covered 165 acres and had with structures that included a small administration building, a restaurant, and a hangar. The Airport had three runways. Approximately 60 privately owned planes were based there as well. There were also accommodations for seaplanes. It was know as the Whipp Airport & seaplane base as well as the Glen Burnie Airport & seaplane base. The Airport was temporarily closed to private traffic during WWII when Robert Ed Whipp flew seaplanes as a test pilot for Baltimore's Martin Aircraft Company. The airport & seaplane base reopened in 1945 after the war ended. Whipp Airport was closed for good aropund 1956 and the property was used to develop housing and a country club. John Winthrop Wright was the chairman and CEO of Wright Investors' Service, a privately held, international investment management and advisory firm in Milford, Connecticut. He also founded the The School for Ethical Education in 1995. Mildred Gibson Wright was the wife of John Winthrop Wright.