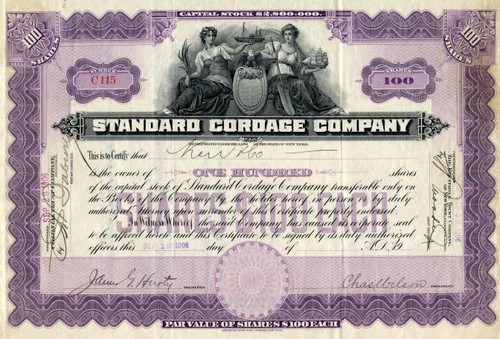 Beautiful uncancelled certificate from the Standard Cordage Company issued in 1906. This historic document was printed by the American Bank Note Company and has an ornate border around it with a vignette of allegorical figures flanking a shield and holding a ship. This item has the original signatures of the Company's President, and Treasurer, and is over 106 years old.

Certificate Vignette
Monopolistic corporation that sparked the panic of 1893. The National Cordage Company, the nation's leading manufacturer of rope and twine, became known as the first failed trust (or monopoly) in American history, one whose demise sparked the disastrous panic of 1893 and the ensuing depression. The company began as a group of rope manufacturers and experimented with the formation of trade associations that would negotiate agreements concerning production of the same or similar products and pools (which fixed prices) before uniting, in 1887, to form the National Cordage Company, a combination trust and corporation. It quickly bought up several smaller competitors, acquiring nominal control of 40 percent of the country's rope and twine production within three years. Reorganizing as a holding company (holding companies control smaller companies by holding the smaller companies' stock or controlling their operations) chartered in New Jersey and increasing its capital stock tenfold to $15 million, the company boasted effective control of about 90 percent of the country's cordage mills by early 1892. Financed by the leading New York banks, National Cordage was touted by the financial press as being one of the nation's rising industrial giants. However, the holding company borrowed large amounts of capital because four-fifths of its production remained in binder twine, a product that generated a cash flow only during harvest time. It also followed the dubious practices of purchasing the entire output of its suppliers on condition that the latter pledge not to equip its competitors, of buying out its competitors on condition that they retire permanently from the field, and of trying to corner the nation's hemp market. With few actual economies of scale resulting from its reorganization in 1887, and with its recurring dependence on having escalating amounts of working capital, National Cordage encountered increasing difficulty paying its creditors. Adding insult to injury, several companies it had bought out used the proceeds from the sale to start new competing enterprises. During the early months of 1893, National Cordage boldly declared a 100 percent stock dividend in addition to making its usual payments to stockholders of 10 percent per annum. Happy stockholders received extra cash, but the financial press had no reaction. Just a few weeks later, however, the company announced its plans to file for receivership, touching off a selling frenzy among its stockholders. Over the next few months, the value of the company's stock plummeted from $138 to $20 per share. When the receiver put in charge of the company's finances discovered that the company treasury was empty, the Commercial and Financial Chronicle proclaimed, "Cordage has collapsed like a bursted meteor." Subsequent attempts to reorganize as the United States Cordage Company and as the Standard Cordage Company also failed by 1912. History from Encyberpedia and OldCompany.com (old stock certificate research service)