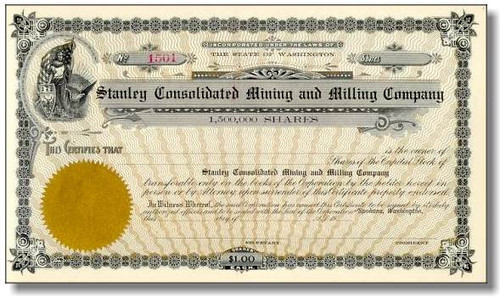 Beautiful unissued Certificate from the Stanley Consolidated Mining and Milling Company. This historic document has an ornate border around it with a vignette of lady liberty with and eagle and flag. This item is over 75 years old. The Stanley Mining Company, an Idaho corporation, was formed on April 16, 1926, for the purpose of taking over all of the property of the Stanley Consolidated Mining and Milling Company, a corporation organized in the State of Washington on April 6, 1900. Eugene Day was the largest stockholder in the original company and did much of the development work at his own expense. The stockholders of the Stanley Consolidated Company had voted for the reorganization on September 18, 1925. The directors of the new company were John H. Wourms, P.J. Maggy, W.A. Devan, Walter B. Heitfeld, and Joseph A. Brown. The Day family owned just over 49% of the stock. When the directors held their first meeting on February 26, 1927, they voted to levy an assessment of 4 mills per share to pay off the outstanding indebtedness of the Stanley Consolidated company amounting to $2,141.55. The property remained idle after 1926 except for assessment work on the Babe & Bobbie claims which were patented in 1932. Other claims included the Badger, Euna, Ibex, Leopard, Leopard Fraction, Panorama, Panorama Nos. 2, 3, 4, & 5, Panther, Stanley, and Silver Chief, all located in the Lelande District of Burke. The mine was developed by three tunnels, the longest of which was 1630 feet. The directors met infrequently. Between the 1940 and 1945 meetings three of the five directors had died: F.M. Rothrock and S.F. Heitfeld being the survivors. At the 1945 meeting Henry L. Day, Wray Farmin, and Paul Jessup were elected to fill the vacancies. On June 18, 1947 the directors met to consider the proposed joint agreement of consolidation with the Hercules and ten other companies, i.e., Tamarack & Custer, Monitor, Duluth, Crystal Lead, Dayrock, Sherman Lead, Treasure Vault, King, Western Union, and Happy Day. The agreement was approved and submitted to the stockholders on September 24, 1947.