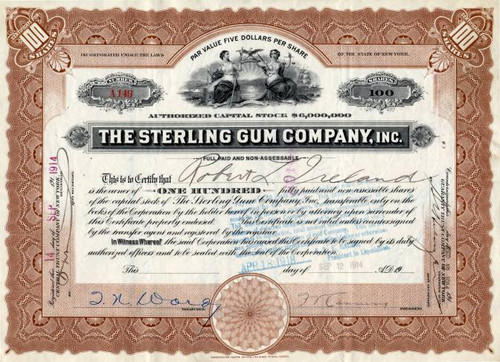 Beautiful certificate from the Sterling Gum Company issued 1916. This historic document was printed by the American Bank Note Company and has an ornate border around it with a vignette of allegorical women. This item has the original signatures of the Company's President, and Treasurer, and is over 96 years old.

Certificate Vignette
As reported in 1914: News items began to appear relating to the intended formation of the Sterling Gum Company, which was to put on the market some new brands of chewing gum. The names of some business men of good standing were mentioned as being the organizers and prospective directors of the new company. Throughout the summer and fall, such items as the following frequently appeared: An official of the Sterling Gum Company says: "Our selling campaign is now well under way. The reception accorded our brands, both new and old, here and in Canada, has exceeded our greatest expectations. Repeat orders within a few days after first allotment have been the rule rather than the exception." The Metropolitan Tobacco Company, the largest tobacco jobber in the United States, is handling Sterling brands in the New York district, and its report to the Sterling Gum officials has been of unusually big sales in and about New York City. Sterling Gum Company has one brand which it is selling exclusively in Canada. This brand is manufactured in Toronto. Its selling agent there reports its initial sale the largest of any newly introduced gum in the history of the Dominion. Those who are directing the affairs of the Sterling Gum Company state that the "inserts" similar to those being used by many of the large tobacco companies, are proving as efficient a means of pushing new gum brands as they proved in the selling campaign of brands of tobacco goods. The new plant of the Sterling Gum Company in Long Island City will be a five-story factory building on the south side of Harris Avenue between Ely Avenue and William Street. It will be a modern fireproof steel structure to cost in the neighborhood of a quarter of a million dollars. The Sterling Gum Company has taken a long term lease at an aggregate rental in the neighborhood of $300,000. The plant will be ready for occupancy about April 1, 1915. It will be opened with a force of over 1,000 employees. The common stock of this company was finally brought out, and perhaps under ordinary circumstances the interest that had been aroused would have been sufficient to assure it a ready market at a satisfactory price. Unfortunately, however, the outbreak of the war and the resulting unfavorable financial conditions upset these calculations, for there appeared in the Wall Street Journal of October 15, 1914, the following inconspicuous item: The Sterling Gum Company syndicate scheduled to dissolve on September 15, has been extended to June 15 next. Notices to this effect will be sent out in a few days. This syndicate underwrote $2,000,000 of the Sterling Gum Company stock. History from OldCompany.com (old stock certificate research service)