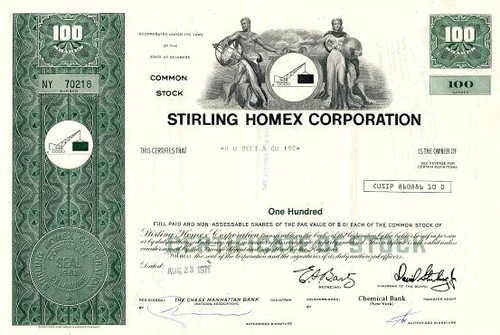 Beautifully engraved certificate from the Stirling Homex Corporation issued in 1972. This historic document was printed by the Security Columbian Banknote Company and has an ornate border with a vignette of the company's logo. This item has the printed signatures of the Company's President and Secretary and is over 34 years old.

Certificate Vignette
The Stirling Homex Corporation planned to manufacture and install modular housing units across the nation. In early 1970, Stirling Homex took their company public. Within a couple of years, it was determined it was all a fraud. The Stirling Homex Corporation planned to manufacture and install modular housing units across the nation. The main obstacle to the large profits the proprietors of this enterprise were anticipating was the Carpenters Union, the union with primary jurisdiction, which had a longstanding and firm policy, as did other A.F.L.-C.I.O. construction unions, of refusing to install prefabricated units. With almost miraculous suddenness, the Carpenters Union reversed its well-known and well-enforced position-not long after seven officials of the union received company stock with a total value of $200,000. An investigative memorandum of the Securities and Exchange Commission describes the transaction in fuller detail: In early March 1970, at about the time of the initial Stirling Homex public offering, David Stirling, Jr. and Yanowitch arranged for certain officials of the Carpenters Union and a senior officer of the A.F.L.-C.I.O. who had introduced Stirling Homex and [Theodore] Kheel to the Carpenters Union, to purchase 6,500 shares of the securities of Stirling Homex.... In order to pay for these purchases in March 1970, David Stirling Jr. requested that Charles Marshall, then Senior Vice President of Central Trust Bank ("Central Trust") in Rochester, New York, lend over $200,000 to these seven Carpenters Union officials and Kirkland in order to help them purchase the stock. Even though these individuals were strangers to Central Bank the loans were made based on the credit worthiness of David Stirling. The loans to these individuals varied in amounts from $13,000 to $60,000....... It appears likely that several indictments will be forthcoming as a result of this investigation. Federal law prohibits employers from making payments or giving loans to union officials and also forbids acceptance of such payments or loans by union officials. In his sworn testimony before a Federal grand jury and the S.E.C. staff, Kirkland acknowledged that he gave advice and introduced Theodore Kheel, a director and special counsel on labor relations of the Stirling Homex Corporation, to officials of the Carpenters Union. Kirkland also admitted before a Federal judge and jury that he signed a promissory note in Kheel's office in the amount of $58,000, arranged for and secured by the corporation. According to the S.E.C., the leaders of the Carpenters Union used the company loans to buy Homex stock at below market price. After the Carpenters Union signed the collective bargaining agreement with the company, it used its influence in persuading the other A.F.L.-C.I.O. building trades unions to install Homex units and to perform other necessary work on construction sites. Eventually, William and David Stirling went to jail for stock fraud and the company went bankrupt. The Carpenters Union officials invoked the Fifth Amendment against self-incrimination, and the government never prosecuted Kirkland.