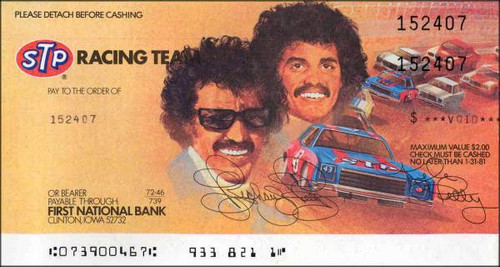 Beautifully engraved check from the STP Racing Team dated 1981. This historic document has an ornate border around it with a picture of Richard and Kyle Petty with NASCAR cars racing. This item has the printed signatures of Richard and Kyle Petty and is over 21 years old. Petty, Richard Lee (1937- ), American automobile racer, winner of 200 National Association of Stock Car Auto Racing (NASCAR) events. Known as King Richard for his longtime leadership of stock-car racing, Petty retired after the 1992 season. Born in Level Cross, North Carolina, the son of race driver and early NASCAR champion Lee Petty, Richard grew up in the world of stock-car racing . He started as a mechanic for his father and began racing in 1958 at the age of 21. He won his first NASCAR race in 1960 and in 1964 took his first of seven victories in the Daytona 500, stock-car racing's premier event. In 1964 he also won his first NASCAR national championship. From the mid-1960s until the end of the 1970s, Petty was a major force in stock-car racing, setting many records and helping increase the sport's popularity. In 1966 he became the first driver to win a second Daytona 500, and in 1967 he won a record 27 races and a second NASCAR driving championship. In 1971, a year in which he took first place 21 times, he won both the Daytona 500 and the Dixie 500, reaching career earnings of more than $1 million and winning his third NASCAR driving title. He won the NASCAR championship again in 1972, breaking his father's record of three titles. He won the Firecracker 400 for the first time in 1975 and repeated in 1977 before enduring a long slump due to physical problems. The slump ended with a sixth victory in the Daytona 500 in 1979, a year in which he again won the NASCAR driving championship. He won his last race in 1984. Petty and his family formed Petty Enterprises, a complete stock-car-racing operation.