Check issued from the Atlanta Braves Major League Baseball Club issued in 1969. The Braves marked the first year of division play in 1969 by winning the West. The Braves were fifth place on Aug. 19, but outplayed San Francisco and Cincinnati down the stretch to win the division. Phil Niekro won 23 games, while Hank Aaron slugged 44 homers and knocked in 97 runs. The Braves lost to the Miracle Mets in the playoffs, three games to none. 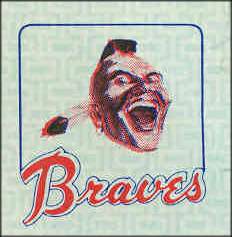