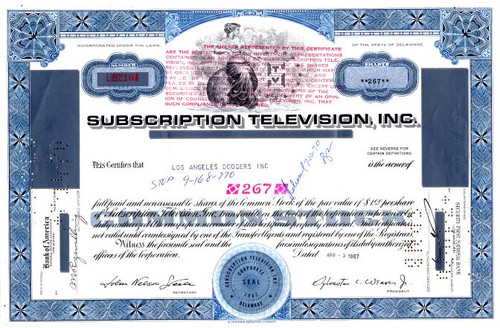 Beautifully engraved certificate from Subscription Television, Inc. issued in 1967 to the Los Angeles Dodgers Inc. This historic document was printed by the Jeffries Banknote Company and has an ornate border around it with a vignette of an allegorical woman leaning on the Earth. This item has the printed signatures of the Company's President, and Secretary, and is over 45 years old. 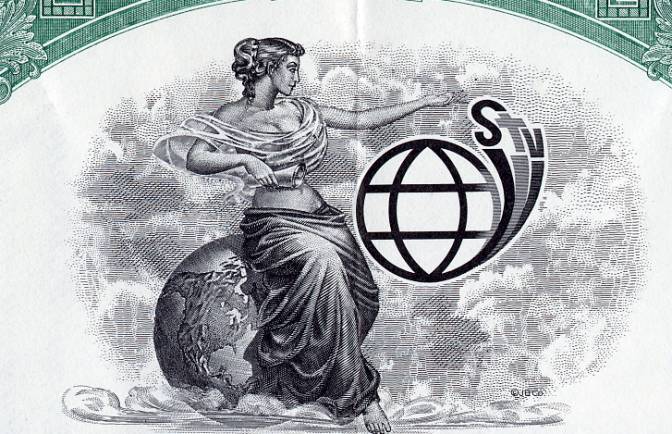 Certificate Vignette
Subscription Television Inc. (STV) was launched in July 1964 and continued through November of that year--a short-lived but nonetheless highly touted pay TV system. STV was the heir (through a complicated series of stock transactions) to Skiatron's over-the-air system. The two major figures behind STV were Skiatron's Matthew Fox and former adman and NBC executive Sylvester L. (Pat) Weaver. STV had built wire networks in San Francisco and Los Angeles, and the company planned eventually to wire major cities as well as to incorporate existing CATV systems. While STV's three channels offered a mixture of sports, movies, children's programs and theatrical performances--typical of most pay TV systems--it was baseball that provided the foundation for its programming. The shift from free terrestrial broadcast TV to subscription cable television is personified in Sylvester "Pat" Weaver, who had made broadcast TV history in the Fifties as the head of NBC. He put on "The Tonight Show" with Steve Allen , and he created the "Today" show in the mornings with Dave Garroway and his sidekick chimp named J. Fred Muggs. These two live talk shows helped make the TV set a "must have" for American households. Talks shows were the "killer app" for early televsision. On his own after leaving NBC, Pat Weaver created "Pay TV" by launching publicly-held Subscription Television (STV) in July 1964. The three-channel coaxial cable network in Los Angeles and San Francisco offered a movie channel, a cultural events channel, and a sports channel -- long before HBO or A&E or ESPN, long before anybody spoke of niche programming. A one-off $5 fee connected you to the service. A weekly $1 charge maintained your service. Special programming could be viewed at 50 cents to $2.50 per selection By November 1964, STV had wired 6,000 homes. Not bad for four months of work. STV's success scared the socks off local broadcasters and motion picture theater owners. Theaters had been closing since television started keeping people home, but now the rivals found common cause, They joined forces to organize a November 1964 ballot initiative to save "free TV" by outlawing "Pay TV: in California. Weaver tried fighting the populist campaign, yet the referendum passed. Courts eventually ruled the measure was unconstitutional, but STV had exhausted its cash reserves long before the vote, so the business closed for both political and economic reasons.