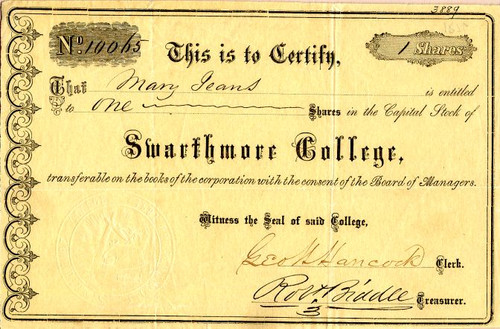 Beautiful certificate for one share from the Swarthmore College issued prior to 1895. This item has been hand signed by the Company's Clerk, George W. Hancock and Treasurer, Robert Biddle, and is over 116 years old. Robert Biddle (1814-1902)- Robert Biddle was Treasurer from 1875-1901 George W. Hancock, Died March 22, 1903, Merion, Pa. Clerk of Corporation, 1878-1894. Swarthmore College is a private, independent, liberal arts college in the United States with an enrollment of about 1,500 students. The college is located in the borough of Swarthmore, Pennsylvania, 11 miles (17.7 km) southwest of Philadelphia. The school was founded in 1864 by a committee of Quakers, including Lucretia Mott, who were members of Philadelphia Yearly Meeting, Baltimore Yearly Meeting and New York Yearly Meeting of the Religious Society of Friends. Swarthmore dropped its religious affiliation and became officially non-sectarian in the early 20th century. The college has been coeducational since its founding. Swarthmore is a member of the Tri-College Consortium, a cooperative arrangement among Swarthmore College, Bryn Mawr College, and Haverford College. The consortium shares an integrated library system of more than three million volumes, and students are able to cross-register in courses at all three institutions. A common Quaker heritage amongst the consortium schools and the University of Pennsylvania also extends this cross-registration agreement to classes at Penn's College of Arts and Sciences. Swarthmore's campus and the Scott Arboretum are coterminous--that is, they are coextensive in land, sharing the same borders. The name "Swarthmore" has its roots in early Quaker history. In England, Swarthmoor Hall in Cumbria was the home of Thomas and Margaret Fell in 1652 when George Fox, fresh from his epiphany atop Pendle Hill in 1651, came to visit. The visitation turned into a long association as Fox persuaded Thomas and Margaret Fell and the inhabitants of the nearby village of Fenmore of Friendly, and Swarthmoor was used for the first Friends' meetings. The school was founded in 1864 by a committee of Quakers who were members of Philadelphia Yearly Meeting, New York Yearly Meeting and Baltimore Yearly Meeting of the Religious Society of Friends. Edward Parrish was its first president. Lucretia Mott was among those who insisted that Swarthmore be coeducational.[4] Solomon Asch and Wolfgang KÃ¶hler were two noted psychologists who were professors at Swarthmore. Asch joined the faculty in 1947 and served until 1966, while KÃ¶hler came to Swarthmore in 1935 and served until his retirement in 1958. The Asch conformity experiments took place at Swarthmore. Swarthmore, one of the nation's finest institutions of higher learning, is a college like no other. Private, yet open to all regardless of financial need. Global in outlook, the College draws students from around the world and all 50 states. Small, yet with the financial strength to offer students and faculty the resources needed to push their own and the world's understanding of disciplines from Arabic to plasma physics, from microbiology to dance, from engineering to art history. Swarthmore celebrates the life of the mind. Since its founding in 1864, Swarthmore has given students the knowledge, insight, skills, and experience to become leaders for the common good. And they do. Swarthmoreans are CEO patent-holders who bring technology to underserved markets, investment bankers looking for alternative forms of energy, lawyers who become college presidents, doctors who serve in Congress, Nobel Prize winners, educators who establish schools in underserved parts of the world, and artists who use their talents to inspire and empower others. So much of what Swarthmore stands for, from its commitment to curricular breadth and rigor to its demonstrated interest in facilitating discovery and fostering a sense of civic responsibility among exceptional young people, lies in the quality and passion of its faculty. Professors at Swarthmore are leading scholars and researchers in their fields, yet remain deeply committed to serving their students as outstanding teachers and mentors. A student/faculty ratio of 8:1 ensures that students have close, meaningful engagement with their professors, preparing them to translate the skills and understanding gained at Swarthmore into the mark they want to make on the world. Located 11 miles southwest of Philadelphia, Swarthmore's idyllic, 425-acre campus is an arboretum, complete with rolling lawns, creek, wooded hills, and hiking trails. From its state-of-the-art L.E.E.D. certified science center to its new residence halls with environmentally responsible design, Swarthmore's buildings and architecture stand as national models of curricular and co-curricular undergraduate facilities. Swarthmore's endowment is the 14th-largest per student among U.S. colleges and universities. This enables the College to admit U.S. citizens and permanent residents without regard to their ability to pay for a Swarthmore education and to fully meet the demonstrated financial need of all admitted students with loan free financial aid awards. Founded by the Religious Society of Friends (Quakers) as one of the nation's first co-educational colleges, Swarthmore today is non-sectarian, but still reflects many Quaker traditions and values. Foremost among them is a commitment to the common good and to the preparation of future leaders who will influence favorably a changing and complex world. History from StockResearch.pro (Professional Old Stock Certificate Research Service), Encyberpedia and Wikipedia.