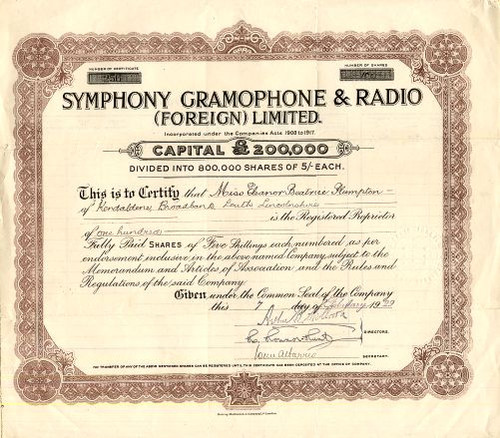 Beautiful certificate from the Symphony Gramophone & Radio (Foreign) Limited issued in 1929. This historic document was printed by Burrup, Mathieson & Company and has an ornate border around it. This item has the signatures of the Company's Director's and Secretary and is over 79 years old. The Symphony Gramophone and Radio Company The Symphony battery powered radiogram. Symphony's product range included a five valve portable receiver, a battery-powered radiogram, with a wind-up turntable, a deluxe mains-powered radiogram and high quality loudspeakers in cabinets. All of the cabinets and loudspeakers were made in-house, and in some of the products an advanced technique, a little like a modern printed circuit board, was used for connecting the electronic components. Brass pressings were riveted onto a sheet of bakelite and special hollow rivets were used instead of valveholders. Eric Waterworth invented the worlds first automatic record, a particular boon at the time when records lasted only a few minutes, and he and his father took it Sydney and came to an agreement with Home Recreations of Sydney to incorporate it into their gramophone, the Salonola. The Salonola was demonstrated it at the 1927 Sydney Show, unfortunately, Home Recreations went into liquidation and the Salonola was never marketed. Nothing daunted, in 1928 Eric Waterworth and his father journeyed to London. They eventually sold the patents outright to a new company, the Symphony Gramophone and Radio Co. Ltd. Waterworth was lucky to have successfully sold his invention, as the following year the depression practically eliminated the gramophone industry world-wide. His invention did not come on the market and the patents lapsed. However, following the second world war, a number of English companies manufactured record-changing gramophones and almost all of them used the stepped centre spindle which was a central feature of Waterworth's design. History from Wikepedia and OldCompany.com.