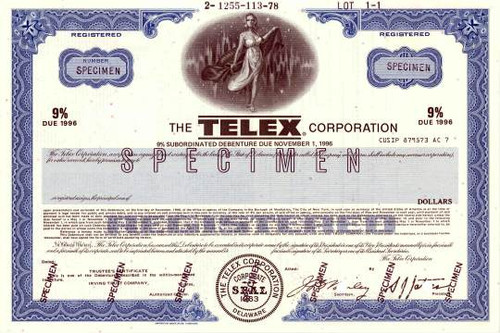 Beautifully engraved SPECIMEN certificate from the Telex Corporation. This historic document was printed by the American Banknote Company and has an ornate border around it with a vignette of an allegorical woman. This item has the printed signatures of the Company's President and Secretary. 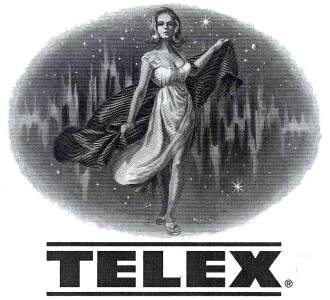 Certificate Vignette
The telex network was a public switched network of teleprinters similar to a telephone network, for the purposes of sending text-based messages. Telex was a major method of sending written messages electronically between businesses in the post-World War II period. Its usage went into decline as the fax machine grew in popularity in the 1980s. The "telex" term refers to the network, not the teleprinters; point-to-point teleprinter systems had been in use long before telex exchanges were built in the 1930s. Teleprinters evolved from telegraph systems, and, like the telegraph, they used binary signals, which means that symbols were represented by the presence or absence of a pre-defined level of electric current. This is significantly different from the analog telephone system, which used varying voltages to represent sound. For this reason, telex exchanges were entirely separate from the telephone system, with their own signalling standards, exchanges and system of "telex numbers" (the counterpart of telephone numbers). Telex provided the first common medium for international record communications using standard signalling techniques and operating criteria as specified by the International Telecommunication Union. Customers on any telex exchange could deliver messages to any other, around the world. To lower line usage, telex messages were normally first encoded onto paper tape and then read into the line as quickly as possible. The system normally delivered information at 50 baud or approximately 66 words per minute, encoded using the International Telegraph Alphabet No. 2. In the last days of the telex networks, end-user equipment was often replaced by modems and phone lines, reducing the telex network to what was effectively a directory service running on the phone network. History from Wikipedia and OldCompany.com (old stock certificate research service)