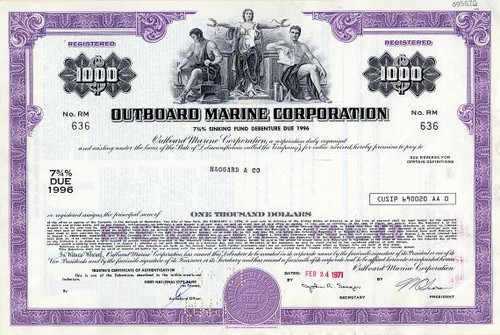 Beautiful certificate from the Outboard Marine Corporation issued in 1971. This historic document was printed by Security Banknote Company and has an ornate border around it with a vignette of a group of 3 allegorical figures. This item has the signatures of the Company's President and Secretary and is over 36 years old. 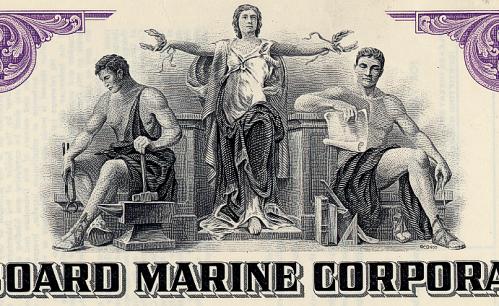 Certificate Vignette
Outboard Marine Corporation (OMC), once a leading manufacturer of outboard motors and small boats, is bankrupt and selling its assets. A subsidiary of Greenmarine Holdings, OMC marketed recreational boats under such names as Chris-Craft, Four Winns, and Seaswirl; fishing boats under the Stratos, Javelin, and Hydra-Sports names; and aluminum boats under the Lowe and Princecraft brands. OMC's outboard motors included the Evinrude and Johnson brands. After heavy losses in the 1990s the company was acquired by Greenmarine Holdings, a group led by Soros Management Fund affiliate Greenway Partners. An affiliate of Genmar Industries has acquired Outboard's boat assets; Bombardier is buying the engine assets. In 1903 Ole Evinrude helped design Harley-Davidson's first carburetor. His outboard-motor design was the basis for Evinrude Motor Company, which he formed in Milwaukee in 1907. He sold Evinrude to Chris Meyer in 1914 and formed ELTO Outboard Motor Company in 1921, producing a motor 33% lighter than the Evinrude. Gasoline-engine pioneer Briggs & Stratton bought Evinrude in 1926 but sold it in 1929 to Briggs & Stratton co-founder Stephen Briggs, who formed a syndicate with Ole Evinrude called the Outboard Motors Corporation. The company introduced electric-starting outboards in 1930 and fully enclosed engines (for safety and noise reduction) in 1934. The next year it bought Johnson Motors (Sea Horse outboards). After WWII the company discontinued the ELTO line and in 1952 bought power-mower maker RPM Manufacturing of Lamar, Missouri. It renamed the mowers Lawn-Boy and by 1957 led the nation in power-mower sales. Foreign sales, an important revenue source from early on, tripled between 1949 and 1956, the year the company adopted its present name. In the 1960s OMC entered new product areas, most importantly stern-drive marine engines, and in 1967 it introduced an all-electronic outboard ignition, now the industry standard. The boating industry boomed from 1982 to 1989, and OMC began to expand its marine business through acquisition and innovation. In 1985 it introduced the first V-8 outboard engine. Between 1986 and 1989 the company spent about $230 million acquiring 10 boat manufacturers. It sold Lawn-Boy (to Toro for $85 million) in 1989. The company bought six boat makers in 1990, including Grumman's aluminum boat operations and Topaz Marine. But in 1990 a luxury tax imposed by Congress spun the industry into a recession. The law was eventually repealed, but the tide of consumer interest had receded, and the industry was left high and dry. OMC sold its Adventurent boat rental subsidiary in 1994 and closed three manufacturing plants. In 1995 the industry was making a strong comeback, and OMC's new CEO Harry Bowman had high hopes for the company's future. His strategy included improving cost structure and introducing innovative products. That year OMC formed a joint venture with Volvo to produce inboard engines. In 1996 the company replaced more than half of its top management. Product lines were refined and focused, and the firm introduced a new fuel-injection system for outboard engines (FICHT). Predicted industry growth never materialized, however. After losing money in four of the past seven years, in early 1997 OMC asked Salomon Brothers to fish around for someone to bail it out. Detroit Diesel bit first, agreeing to pay $16 a share. Greenmarine Holding, an investor group led by New York investment firm Greenway Partners and affiliated with Soros Management Fund, topped that with an $18 per share offer that resulted in a $373 million deal. Soon after, CEO Bowman was replaced by David Jones, former head of the Mercury Marine division of rival Brunswick. Brunswick filed suit, fearing possible trade-secret violations, but the matter was settled between the companies. Greenmarine reviewed operations and decided in 1998 to separate production of fresh and saltwater boats and close OMC's plants in Old Hickory, Tennessee; Milwaukee, Wisconsin; and Waukegan, Illinois (a plant that was later idled). In 1999 OMC sold its 40% stake in Volvo Penta Marine Products. Laden with heavy losses and debt from the takeover, OMC suspended operations and filed for Chapter 11 bankruptcy protection late in 2000. Early in 2001 the bankruptcy court selected Bombardier (engine assets) and Genmar Industries (boat assets) as the best bidders. Genmar completed its purchase of OMC's boat assets later that year. History from OldCompanyResearch.com.