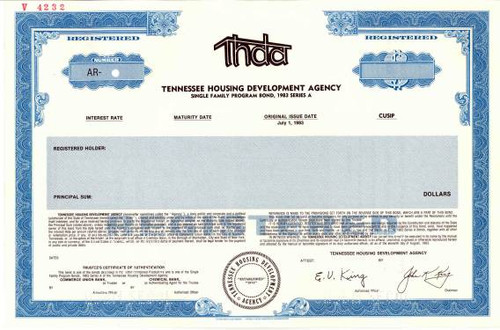 Beautifully engraved specimen certificate from the Tennessee Housing Development Agency. This historic document was printed by the Security-Columbian United States Banknote Company in 1983 and has an ornate border around it with a vignette of the agency's logo. The Tennessee Housing Development Agency (THDA) was established by the Tennessee General Assembly in 1973 in order to promote the production of more affordable new housing units for very low, low and moderate income individuals and families in the state, to promote the preservation and rehabilitation of existing housing units for such persons, and to bring greater stability to the residential construction industry and related industries so as to assure a steady flow of production of new housing units. THDA's goal is to provide housing assistance to those in need, and to do so by offering a variety of programs to serve various types of need. One of the primary ways we assist people is by offering mortgages for first-time homebuyers, at below conventional market interest rates. In 2000, the Agency celebrated the financing of the 75,000th homebuyer. The Agency also serves as the master servicer for all active mortgages funded by THDA. In addition to helping homebuyers, THDA administers the federal Section 8 rental assistance programs, including both tenant- and project-based. THDA also administers grant programs, awarded on a competitive annual cycle, for rehabilitation and new construction of owner-occupied units and small rental projects. THDA is also involved in the development and rehabilitation of multifamily rental housing for low-income families by administering the federal Low-Income Housing Tax Credit, which is a competitive process, and by setting aside a portion of Bond Authority to be allocated to local authorities for specific multifamily developments.