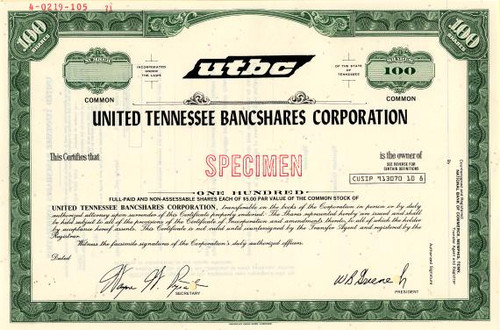 Beautiful engraved specimen certificate from the United Tennessee Bancshares Corporation dated in 1971. This historic document was printed by American Bank Note Company and has an ornate border around it with a vignette of the company's logo. This item has the signatures of the Company's President, William B. Greene, Jr. and Secretary and is over 36 years old.

Certificate Vignette
1968-06-01 TENNESSEE FINANCIAL CORPORATION located at MEMPHIS, TN was established as a Domestic Entity Other. 1969-06-30 TENNESSEE FINANCIAL CORPORATION was renamed to UNITED TENNESSEE BANCSHARES CORPORATION. 1970-12-31 UNITED TENNESSEE BANCSHARES CORPORATION changed from Domestic Entity Other to Bank Holding Company. 1978-04-27 UNITED TENNESSEE BANCSHARES CORPORATION was renamed to NATIONAL COMMERCE BANCORPORATION. 2001-05-01 NATIONAL COMMERCE BANCORPORATION was renamed to NATIONAL COMMERCE FINANCIAL CORPORATION. 2004-10-01 NATIONAL COMMERCE FINANCIAL CORPORATION was acquired by SUNTRUST BANKS, INC. William B. Greene, Jr. has been Chairman of the Board since July 14, 2003 and a Director of the Company since August 1999. Mr. Greene has been Chairman, Chief Executive Officer and President of BancTenn Corp since 1974 and Chairman, Chief Executive Officer and President of Carter County BancCorp since 1972. At the age of 26, Mr. Greene was the youngest bank President and CEO in the United States and formed the first statewide banking organization in the history of Tennessee, United Tennessee Bancshares Corporation. Mr. Greene is immediate past Chairman of the Wake Forest University Board of Trustees and Chairman of the Wake Forest University Trustee Investment Policy Committee for the last eight years, which oversees the University's billion-dollar endowment. Mr. Greene is also a member of the Board of Trustees of Milligan College where he recently received his Honorary Doctor of Economics. Mr. Greene was a member of the Young Presidents' Organization for eighteen years and in 1998 served as International President of the World Presidents' Organization, the graduate school of YPO. Mr. Greene is a graduate of Wake Forest University with a B.S. Degree in Philosophy, Psychology and History. Mr. Greene did post graduate work at Wake Forest University and the University of Illinois. He is a graduate of the Bank Marketing and Public Relations School at Northwestern University, and a graduate of the Stonier Graduate School of Banking at Rutgers University. About Specimens Specimen Certificates are actual certificates that have never been issued. They were usually kept by the printers in their permanent archives as their only example of a particular certificate. Sometimes you will see a hand stamp on the certificate that says "Do not remove from file". Specimens were also used to show prospective clients different types of certificate designs that were available. Specimen certificates are usually much scarcer than issued certificates. In fact, many times they are the only way to get a certificate for a particular company because the issued certificates were redeemed and destroyed. In a few instances, Specimen certificates we made for a company but were never used because a different design was chosen by the company. These certificates are normally stamped "Specimen" or they have small holes spelling the word specimen. Most of the time they don't have a serial number, or they have a serial number of 00000. This is an exciting sector of the hobby that grown in popularity over the past several years.