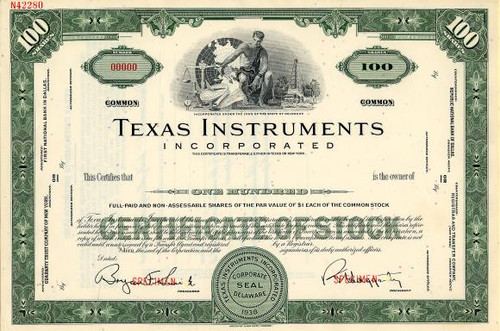 Beautiful engraved specimen from the Texas Instruments Incorporated printed prior to 1966. This historic document was printed by the American Bank Note Company and has an ornate border around it with a vignette of an allegorical man amongst many tools including a scale, a sundial and a microscope. This item has the printed signatures of the Company's President ( Pat Haggerty ) and Secretary. We only have one of each color.

Certificate Vignette
Texas Instruments Incorporated is the world leader in digital signal processing and analog technologies, the semiconductor engines of the Internet age. TI is a leader in the real-time technologies that help people communicate. We are moving fast to drive the Internet age forward with semiconductor solutions for large markets such as wireless and broadband access and for new emerging markets such as digital cameras and digital audio. HAGGERTY, PATRICK EUGENE (1914-1980). Pat Haggerty, business executive, son of Michael Eugene and Lillian (Evenson) Haggerty, was born at Harvey, North Dakota, on March 17, 1914. He married Beatrice E. Menne on February 26, 1938; they had five children. At an early age Haggerty built a prize-winning radio and became one of the first ham radio operators in North Dakota. He entered Marquette University in 1931 with a scholarship and worked part-time at the Badger Carton Company, Milwaukee. After graduating summa cum laude from the Marquette University School of Electrical Engineering in 1936, he became a full-time production manager at Badger. A year later he was given responsibility for all engineering, manufacturing, and administrative functions at Badger except sales. In World War II,qv Haggerty, an ensign in the United States Naval Reserve, served in the Bureau of Aeronautics, Department of the Navy, Washington, D.C. Initially, he evaluated the performance of manufacturers supplying electronic equipment to the United States Navy; he was later given responsibility for all procurement and production of naval airborne electronic equipment and progressed to the rank of lieutenant. During this period he met J. Erik Jonsson of Geophysical Service, Incorporated, now Texas Instruments, Incorporated GSI, founded in 1930 as Geophysical Service, was the first independent contractor specializing in the reflection-seismograph method of geophysical exploration. It was found that similar techniques could be used to locate submerged submarines, and in 1942 the company began building electronic systems for military use. Jonsson and Haggerty talked of the need after the war for a good, small company to combine electrical and mechanical technology for innovative military and civilian products. Haggerty joined GSI in Dallas in November 1945 as general manager of the newly formed Laboratory and Manufacturing Division, with responsibility for developing the research, engineering, and manufacturing phases of the company's operations. Manufactured products gradually overtook services in sales volume, and in December 1951 GSI became Texas Instruments, Incorporated. Haggerty became executive vice president and director in 1951, president in 1958, and chairman in 1967, a post he held until retiring. For TI to be a significant electronics company, Haggerty believed that it was necessary to do more than assemble components. When Western Electric offered to sell licenses for the manufacture of transistors in 1951, Haggerty seized the opportunity to provide components that would replace bulky vacuum tubes, such as those used in radios. Within months TI had its first transistor, and by the latter part of 1953 the firm was mass-producing germanium transistors under the direction of Mark Shepherd, Jr. Initial prices were high, however, and Haggerty sought a high-volume manufacturing base to lower costs and produce ongoing demand. He decided that the portable-radio market would stimulate demand, and the pocket-sized Regency radio was introduced just in time for Christmas, 1954. Thus began a new era in electronics technology. That same year TI pioneered commercial production of transistors made from silicon, a material that could withstand high operating temperatures occurring in more complex, sophisticated systems such as computers. Haggerty believed that electronics could benefit all parts of society, and discussions led to the hiring of research engineers to explore the possibilities. One of these engineers, Jack Kilby, invented the integrated circuit in TI laboratories in 1958. Mr. Haggerty had served Texas Instruments and its predecessor company, Geophysical Service Inc., for more than 30 years. In this period, annual sales of the company grew from less than $3 million to nearly $1.4 billion in 1975. He joined GSI in 1945 as a general manager of the laboratory and manufacturing division with prime responsibility to broaden the base of the geophysical company to include manufactured products. He was elected executive vice president and director of TI in 1951, president in 1958, and chairman in 1967. He retired in February 1976. Other major achievements of TI under Haggerty's leadership included the development of new military technologies in laser guidance, infrared night-vision equipment and airborne radars; the invention of the electronic hand-held calculator; the development of the thermal printhead, which made possible a family of data terminals with silent printers; the invention of the single-chip microprocessor, the "brain" of a wide range of electronic devices; the practical application of information theory to seismic data processing through development of digital techniques for recording and processing geophysical data; the evolution of a widely studied management system (Objectives, Strategies, and Tactics) for managing the process of technological innovation; and consistent improvements in productivity that permitted steady price reductions in the face of increasing inflation. "HAGGERTY, PATRICK EUGENE." from The Handbook of Texas About Specimens Specimen Certificates are actual certificates that have never been issued. They were usually kept by the printers in their permanent archives as their only example of a particular certificate. Sometimes you will see a hand stamp on the certificate that says "Do not remove from file". Specimens were also used to show prospective clients different types of certificate designs that were available. Specimen certificates are usually much scarcer than issued certificates. In fact, many times they are the only way to get a certificate for a particular company because the issued certificates were redeemed and destroyed. In a few instances, Specimen certificates we made for a company but were never used because a different design was chosen by the company. These certificates are normally stamped "Specimen" or they have small holes spelling the word specimen. Most of the time they don't have a serial number, or they have a serial number of 00000. This is an exciting sector of the hobby that grown in popularity over the past several years.