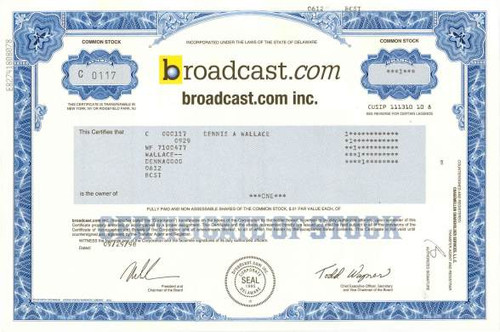 Beautifully engraved certificate from the Broadcast.com, Incorporated issued in 1998. This historic document was printed by the United States Banknote Company and has an ornate border around it. This item has the printed signatures of the Company's President ( Mark Cuban ) and Chief Executive Officer ( Todd R. Wagner ) and is over 5 years old. This is a low number certificate #117 and the only one we have had for sale. Broadcast.com was is the leading aggregator and broadcaster of streaming media programming on the Web with the network infrastructure and expertise to deliver or "stream" hundreds of live and on-demand audio and video programs over the Internet or intranets to hundreds of thousands of users. The broadcast.com Web sites offered a large and comprehensive selection of programming, including sports, talk and music radio, television, business events, full-length CDs, news, video, commentary and full-length audiobooks, serving an average of over 800,000 unique users per day. Broadcast.com broadcasts on the Internet 24 hours a day, seven days a week, and its programming includes more than 385 radio stations and networks, 40 television stations and cable networks, and game broadcasts and other programming for over 420 college and professional sports teams. Broadcast.com also provides Internet and intranet broadcasting services to businesses and other organizations, including turnkey production of live and archived press conferences, earnings conference calls, investor conferences, trade shows, stockholder meetings, product introductions, training sessions, distance learning telecourses and media events. Broadcast.com was acquired by Yahoo.