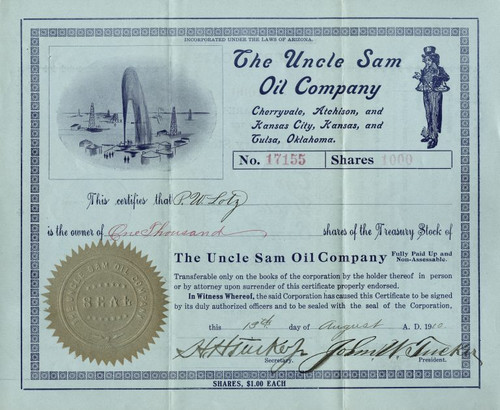 Beautifully treasury stock certificate from the Uncle Sam Oil Company issued no later than 1910. This historic document has an ornate border around it with a vignette of Uncle Sam and an oil field. This item is hand signed by the Company's President and Secretary, Henry Harrison Tucker Jr. and is over 109 years old. Henry Harrison Tucker Jr. alternated signed as President and Secretary. Incorporated in the Territory of Arizona 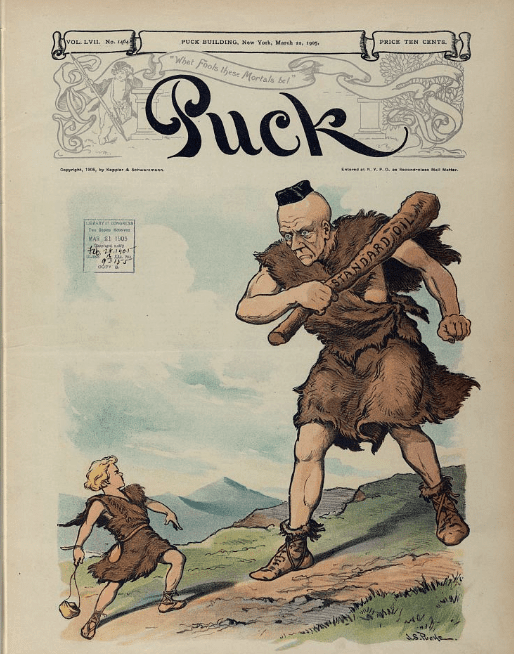 1905 Puck Magazine a cartoon featuring 'A Kansas David in the Field.'
Cartoon showing Henry Harrison Tucker, Jr. and John D. Rockefeller,
The Uncle Sam Oil Company began in 1909 with the erection of a refinery in Oklahoma City, and the laying of a pipe line from the OKC oil fields to Kansas City, Kansas. The company plan to have additional operations in Cherryvale and Atchison, Kansas and Tulsa, Oklahoma. Henry Harrison Tucker Jr. (1878-1959) is a colorful and litigious character whose petroleum ventures included both the Texas American Syndicate and Uncle Sam Oil Company. He left reams of court transcripts and contemporary media reports either supporting or condemning his operations. In 1905 he was celebrated by some as an oilfield David taking on the Goliath of John D. Rockefeller's Standard Oil Company. Tucker was excoriated by others, who described him as "a swindler and a fake more contemptible than any one of his breed for he mixed with his fraudulent compound vicious slander and libel in order to serve his mercenary purposes," according to the July 22, 1922, Financial World. An earlier congressional report, "Leases for Oil and Gas Purposes, Osage National Council" by the U.S. House Committee on Indian Affairs (H.R. 27726), examined Uncle Sam Oil's origins, operations and controversy in detail. In 1905, Puck had a cartoon featuring 'A Kansas David in the Field.' Cartoon showing Henry Harrison Tucker, Jr., who tried to run small oil refineries in Kansas, battling John D. Rockefeller of the monopolistic Standard Oil Company. Cartoon by John S. Pughe from Puck, 22 March 1905. History from OldCompany.com and American Oil & Gas Historical Society.