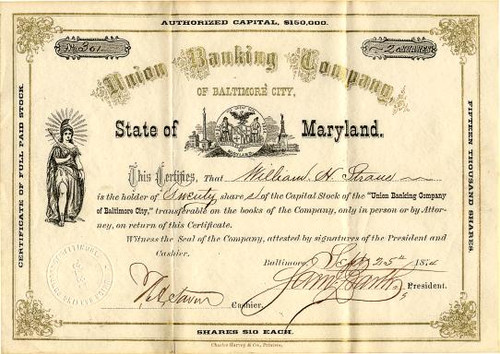 Beautiful certificate from the Union Banking Company of Baltimore City issued in 1874. This historic document was printed by Charles Harvey & Company and has an ornate border around it with a vignette of the great seal of Maryland. This item has the signatures of the Company's President, Sam Barth? and Cashier, Felix A. Savin and is over 134 years old. The certificate was issued to William H. Straus.

New-York Times - May 14, 1878
A BANK WITHOUT FUNDS. THE LATE ALLEGED CONSPIRACY IN BALTIMORE?CASE OF THE UNION BANKING COMPANY? FOR A NEW TRIAL. Special Dispatch to the New-York Times. BALTIMORE, May 13.?The Supreme Court of Maryland met to-day to hear the motion for a new trial in the case of Felix A. and Marcus D. Savin, convicted in February last with J.M. Baldwin of a conspiracy to defraud in connection with the affairs of the late Union Banking Company of this city. The points advanced by the defense as grounds for a now trial were, that the acts were all dono in NewYork; that there was no proof that M.D. Savin ... knew tho Union Bnnkini; Company to be insolvent, and had no or Its affairs what could be gathered from his letter of June 25, 1877, which show a that of deposit had beon sent to for negotiation for the benefit of tho . He urns with New-York parties to buy a controlling in tho bank, and could not, therefore, designed to cheat arty ono. The statement in tho certificate that Baldwiu tied deposited the amount stated is not false , because as the bunk and any third. person the certificate it was true in Inw that he had that money On the part of the it was contended that the Union Bnnk? ing Company was incorporated in 1879, and continued doing business until October, 1877. Its paper wont to protest on the 3d of October, 1877, and when the doors closed there were $11 80 in the treasury. 1I?D. Snvin and J. 11. Bnhin?in were residents of Ivew-York, and professed to be President and Vico?l rcaitlent of the " Peerlesx Paper Potent Afanufacturing Compan}-." On .June 25. 1, JI. D. Savin seat to F. A. Savin a loner n of deposit of the banking company 80U issued to J. Di. Baldwin, saving he it best not to it, and aho with it other borrowed paper which he wished F. ? . savin to hold. namely, n note of Bnldwin for $l,685 37, his own note for the same amount, the note of the Peerless Paper Patent :; Company for ,216 51, and that of Frank , nn of said company, for $:. 48, as se. entity for the certificates of issued to J. ilf. Baldwiu. Receiver oP the bank, when he took thence notes to New-York, found they?were worthless and of straw. On July 25, 1877, there were issued by F. A. Snvin to J. '.11. Bnldwin 9(i of ? $53,000, where no money had been deposited by Baldwln. These were sent to ill. D. Savin, in\ew?York, and he suc? resoled in passing Fl,5()0 of them on Sereennt Brothers for n quantity of . It was argued that the acts and declarations of one conspirator are the acts and oP all. The verdict should be sustained by the court if the evidence, by any fair construction, will warrant such . If the court has no right or power to control a of a jury in n criminal case by an instruction, it lips no paw et to set aside its verdict because it with it in the construction of law. Such an in the Constitution does not and could not carat. The court, niter hear? tug argument, held a mot ion suG curia.