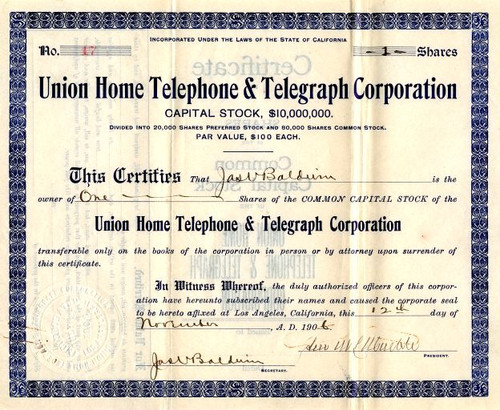 Beautiful certificate from the Union Home Telephone & Telegraph Corporation issued in 1906. This historic document has an ornate border around it. This item has beeen hand signed by the Company's President, J. M. C. Marble and Secretary, J. V. Baldwin and is over 105 years old. 1907 - LOS ANGELES, CAL.--Articles of incorporation have been filed by the Union Home Telephone & Telegraph Company, with headquarters at Los Angeles. The incorporators are J. M. C. Marble, of Los Angeles; John E. Marble, of Pasadena; J. E. Fishburn, of Los Angelts; Geo. Ellis, J. V. Baldwin, John Van Liew, F. W. Wachter, of Lcs Angeles; A. K. Detweiler. of Toledo, and A. B. McCutcheon, of Los Angeles. The authorized capitalization is $10,000,000, and the sum of $150,000 has been subscribed. It is proposed to build telephone and telegraph lines from San Diego to Los Angeles and Bakersfield, from Los Angeles to San Bernardino, Santa Barbara and other placts. The filing of this incorporation follows the reorganization of the Home Company some time ago. Los Angeles, Cal.--The deal for the acquisition of the various Home telephone companies by the Union Home Telephone & Telegraph Company was completed recently when final payment was made to W. L. Porterfield for the controlling interest of the Independent companies at San Pedro, Long Beach, Santa Ana, San Bernardino and Ventura. According to the report of the expert employed to look up the matter, the present net income of these five companies is $50,000. In addition to these plants, the uncom-' pleted plants at Anaheim. Fullerton, Corona, Colton and Highland have been acquired by the company. John Miner Carey Marble was born July 27, 1833 in Pennsylvania. He and his widowed mother moved to Kalida in 1846. At 21 he became a member of the firm of Lye and Marble, general merchants in Delphos. After a time, he disposed of his mercantile interests and organized the First National Band of Delphos, later becoming the president. He was instrumental with others in securing to the town the Delphos Union Stave Co. and the Ohio Wheel Company. In 1864-65 Col. Marble commanded the Allen County Regiment of the Ohio National Guard. Col. Marble was married in 1861 and they had one son, his wife died in 1865. He remarried in 1870. They had two sons and one daughter. In 1874 he moved to Van Wert, becoming the president of the First National Bank. He paid for the lots on which the First Methodist Episcopal Church was built and had them deeded to the church. In 1876 Marble was one of fourteen founders of the Van Wert County Mutual Fire Insurance Company, which later became Central Mutual. In 1878 Marble helped develop the Cincinnati, Jackson, and Mackinaw railroad. Also in 1878, Col. Marble disposed of his interests in the First National Band. He established the private banking house of Emerson, Marble and Co., which in 1883 was changed to the Van Wert National Bank, with col. Marble as president. Col. Marble moved to California, where he was president of the National Bank of California in Los Angeles. He died in 1912. Some very interesting facts concerning the portion of Delphos known as Marbletown are probably not generally know here. Just why is it called Marbletown? Well, that portion of the city was named for one of the early financiers of Delphos, J.M.C. Marble, who was the first cashier of the National Bank in this city. He was also one of the directors of the Ohio Wheel Company which was founded in Toledo in 1868, moved to Delphos in 1872 and was for many years one of the leading employing institutions here. Mr. Marble was president of the Wheel company from 1873 to 1885. He became very wealthy, having been rated at better than one million dollars. The main street of Marbletown, Clime Avenue, was named for James H. Clime, a local contractor who built the first Methodist church erected in Delphos and also was the builder of a large number of homes and other buildings in early Delphos. Skinner Avenue, which is south of Clime and parallels that street, was named for a Mr. Skinner, who was also a cashier of the National Bank in the early days and whose grandson, Cloyd Hunt, served in the same capacity many years later. History from Wikipedia and OldCompany.com (old stock certificate research service).