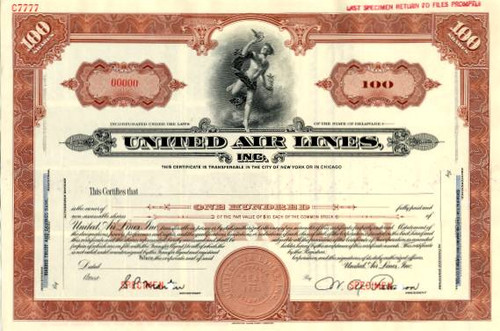 Beautifully engraved Specimen certificate from the United Air Lines. This historic document was printed by American Bank Note Company and has an ornate border around it with a vignette of Mercury holding a wheel with wings. 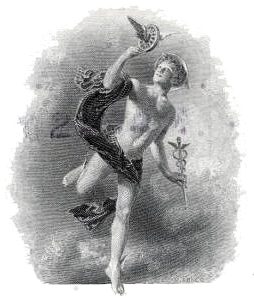 Certificate Vignette
UAL Corporation is the holding company for United Airlines, the largest air carrier in the world. With hubs in Chicago, Denver, Los Angeles, San Francisco and Washington, D.C., and key international gateways in Tokyo, London, Frankfurt, Miami and Toronto, United flies to some 133 destinations in 28 countries. United's 101,950-plus employees worldwide bring people together safely, conveniently and efficiently over 2,300 times a day. United Airlines' customers also enjoy access to more than 815 destinations around the world through Star Alliance, the leading global airline network. United is an industry innovator with customer-service breakthroughs such as Economy PlusSM seating, the United First SuiteSM, Our United CommitmentSM, E-TicketSM service, airport gate readers, The ChariotSM mobile airport podium, United Shuttle, and the introduction of the technologically advanced Boeing 777. United's Mileage Plus® program, with almost 40 million enrolled members, has been named the best frequent flyer program by Business Traveler International magazine in 1996, 1997, 1998 and 1999. United also leads the way in safety and technological advancements for the aviation industry. The pioneer of systems such as the Enhanced Ground Proximity Warning System (EGPWS), United always focuses on its top value of "safety at all times, in all things." United's mission statement is: "To be recognized worldwide as the airline of choice." About Specimens Specimen Certificates are actual certificates that have never been issued. They were usually kept by the printers in their permanent archives as their only example of a particular certificate. Sometimes you will see a hand stamp on the certificate that says "Do not remove from file". Specimens were also used to show prospective clients different types of certificate designs that were available. Specimen certificates are usually much scarcer than issued certificates. In fact, many times they are the only way to get a certificate for a particular company because the issued certificates were redeemed and destroyed. In a few instances, Specimen certificates we made for a company but were never used because a different design was chosen by the company. These certificates are normally stamped "Specimen" or they have small holes spelling the word specimen. Most of the time they don't have a serial number, or they have a serial number of 00000. This is an exciting sector of the hobby that grown in popularity and realized nice appreciation in value over the past several years.