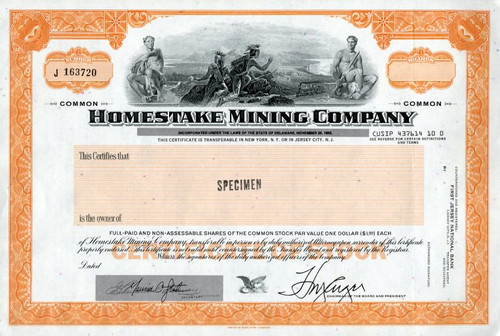 Beautifully engraved specimen certificate from the Homestake Mining Company. This historic document was printed by the American Banknote Company and has an ornate border around it with a vignette of two Indians overlooking a hillside with mountains, a river, train, bridge and ship in the background. This item has the printed signatures of the Company's Chairman and Secretary.

Certificate Vignette
Homestake began mining operations in 1877. In 1879, Homestake common stock was listed on the New York Stock Exchange where it has traded continuously since listing. The Company's stock also is traded on the Australian Stock Exchange, and the Swiss Stock Exchanges in Basel, Geneva and Zurich and on the over-the-counter markets in Frankfurt, Germany and Paris, France. Homestake owns 50.6 Percent of Prime Resources Group Inc. which is traded on the Toronto Stock Exchange and the Vancouver Stock Exchange in Canada. The Company was founded to develop the Homestake mine discovered in the Black Hills of the Dakota Territory in 1876. The Homestake Black Hills, South Dakota mine has produced more than 39 million ounces since 1876 and is the Company's largest producer. Operations consist of an 8,000-foot deep underground mine, an open-pit mine, a mill and a gold refinery. Ore zones have become lower grade and more fragmented at depth but this has been largely offset by continued success in reducing unit costs. As of December 31, 1996, proven and probable gold reserves were 4.7 million ounces, sufficient for another 10 years of mining at current rates of production. It was a gold mining company until its diversification into uranium mining and production in the 1950s, its development of lead and zinc mines in the 1960s and the acquisition of oil and gas properties in the 1980s. Following years of profitable operation, the Company sold its oil and gas interests in 1989, closed its last remaining uranium mine in the same year and sold its interest in the lead and zinc business in 1990. In 1989, Homestake joined with two partners in the development of a major sulfur discovery, Main Pass 299, in the Gulf of Mexico. In 1975, the Company made its initial investment in the Kalgoorlie gold district of Western Australia. In 1987, Homestake sold 20 Percent of the stock of Homestake Gold of Australia (HGAL) to the public. Subsequently, HGAL acquired a 50 Percent interest in certain additional properties in the famous Kalgoorlie mining district known as the Golden Mile. In 1996, Homestake acquired the 18 Percent of HGAL that it did not own at that time for 8.5 million shares of Homestake shares valued at $142 million and approximately $23 million in cash. In 1992, Homestake acquired International Corona Corporation, a large Canadian gold producer, for 37.2 million Homestake shares having a value of approximately $480 million. As a result of the acquisition, Homestake added 600,000 ounces to its yearly production of gold and increased its gold reserves by more than 5.4 million ounces. In addition, through Prime Resources Group Inc (Prime) the Company acquired the high-grade Eskay Creek deposit in British Columbia. The Eskay Creek mine currently is Homestake's lowest cost producer. Homestake's annual gold production is expected to be approximately 1.9 million ounces in 1997. Operations in the United States are expected to contribute almost 40 Percent of the Company's production, primarily from the Homestake, McLaughlin and Round Mountain mines. Gold production from Canada also is expected to be about 40 Percent of the Company's total, principally from the Williams, David Bell, Eskay Creek and Snip mines. The remaining 20 Percent is expected to come from the Kalgoorlie operations in Western Australia. During the last several years, Homestake has placed great emphasis on reducing its cash production costs. In 1996, total cash costs were $248 per ounce compared to $257 per ounce in the preceding year. Total production costs for the Company were $306 per ounce during 1996 excluding $19 per ounce for administrative expenses and $23 per ounce for exploration expenses. About Specimen Certificates Specimen Certificates are actual certificates that have never been issued. They were usually kept by the printers in their permanent archives as their only example of a particular certificate. Sometimes you will see a hand stamp on the certificate that says "Do not remove from file". Specimens were also used to show prospective clients different types of certificate designs that were available. Specimen certificates are usually much scarcer than issued certificates. In fact, many times they are the only way to get a certificate for a particular company because the issued certificates were redeemed and destroyed. In a few instances, Specimen certificates were made for a company but were never used because a different design was chosen by the company. These certificates are normally stamped "Specimen" or they have small holes spelling the word specimen. Most of the time they don't have a serial number, or they have a serial number of 00000. This is an exciting sector of the hobby that has grown in popularity over the past several years.