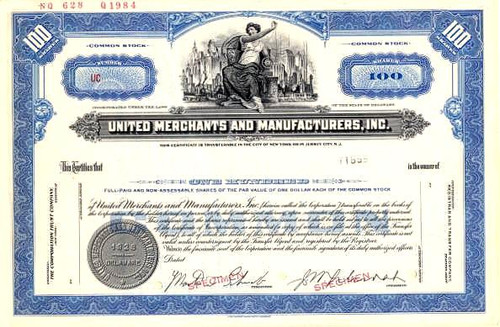 Beautifully engraved Specimen Certificate from United Merchants and Manufacturers, Inc . This historic document was printed by the Columbian Banknote Company and has an ornate border around it with a vignette of a woman with a city in the background.

Certificate Vignette
About Specimen Certificates United Merchants and Manufacturers, Inc. ("UM&M" or the "Company") is a diversified company engaged principally in the manufacture and distribution of apparel textiles and the design, manufacture and distribution of accessories. The Company also operates 51 discount outlet stores which sell the Company's and other manufacturers' products. The Company's operations are located in the United States. The following is a description of each of UM&M's two business segments: Apparel Textiles The apparel textiles segment consists of the Company's Buffalo Mill, an integrated yarn-spinning and weaving mill focused primarily on products for the apparel market. The Buffalo Mill, located in South Carolina, produces a wide variety of blended yarns, including specialty yarns, and weaves fabrics mainly from the yarns which it produces. The segment competes with a large number of small concerns, as well as large integrated enterprises. In addition, low-priced imports and fluctuations in the greige market are a significant factor impacting margins. The principal factors of competition consist of quality, styling, service, length of delivery cycle and price. At June 30, 1994, this segment had approximately $9,670,000 unfilled orders believed to be firm, all of which are expected to be filled during the current fiscal year, compared to approximately $16,620,000 at the end of fiscal 1993. Accessories and Apparel The Company's accessories and apparel segment consists of it's 79% owned subsidiary, Victoria Creations, Inc. ("Victoria") and a chain of 51 discount retail stores. Victoria is one of the leading designers, manufacturers and distributors of costume jewelry throughout the United States and also exports such products, principally to Japan and Western Europe. Victoria produces a broad range and assortment of costume jewelry, including relatively expensive, high quality items sold under the Bijoux Givenchy(R), Richelieu(R) and Karl Lagerfeld(R) trade names and private label jewelry for major department and chain stores. Victoria markets its products using its own sales force throughout the United States, primarily to department and chain stores and, to a lesser extent, to mass merchandisers and mail-order distributors. In addition, Victoria has established a factory direct business to design and manufacture unique and proprietary costume jewelry-type items for certain customers. The costume jewelry industry is highly fragmented and includes many small firms. The Company believes that Victoria is one of the largest manufacturers of costume jewelry in the United States. Within the industry, there are manufacturers that focus on low-margin, basic items and those that emphasize higher-margin (and higher risk) items geared to be highly fashionable. The Company believes that only a few companies, of which Victoria is one, combine manufacturing and marketing capabilities for both basic and high fashion items. Victoria competes on the basis of design, quality, reliability as a supplier, service to the customer and price. Its major competitors are the Monet, Marvela and Trifari divisions of Crystal Brands, Inc.,Anne Klein division of Swank, Inc., Liz Claiborne, Inc. and Napier, Inc. About Specimen Certificates Specimen Certificates are actual certificates that have never been issued. They were usually kept by the printers in their permanent archives as their only example of a particular certificate. Sometimes you will see a hand stamp on the certificate that says "Do not remove from file". Specimens were also used to show prospective clients different types of certificate designs that were available. Specimen certificates are usually much scarcer than issued certificates. In fact, many times they are the only way to get a certificate for a particular company because the issued certificates were redeemed and destroyed. In a few instances, Specimen certificates were made for a company but were never used because a different design was chosen by the company. These certificates are normally stamped "Specimen" or they have small holes spelling the word specimen. Most of the time they don't have a serial number, or they have a serial number of 00000. This is an exciting sector of the hobby that has grown in popularity over the past several years.