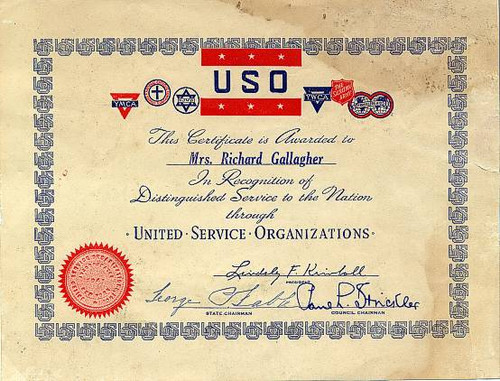 Beautiful certificate from the United Service Organizations. This historic document has an ornate border around it with a vignette of the logos of different United Service organizations. This item has the signatures of the Company's President, State Chairman, and Council Chairman. The certificate was issued to Richard Gallagher. Light water stain. The United Service Organizations Inc. (USO) is a private, nonprofit organization that provides morale and recreational services to members of the U.S. military, with programs in 140 centers worldwide. Since 1941, it has worked in partnership with the Department of Defense (DOD), and has provided support and entertainment to U.S. armed forces, relying heavily on private contributions and on funds, goods, and services from DOD. Although congressionally chartered, it is not a government agency. During World War II, the USO became the G.I.'s "home away from home," and began a tradition of entertaining the troops that continues today. Involvement in the USO was one of the many ways in which the nation had come together to support the war effort, with nearly 1.5 million Americans having volunteered their services in some way. After it was disbanded in 1947, it was revived in 1950 for the Korean War, after which it also provided peacetime services. During the Vietnam War, USOs were sometimes located in combat zones. The organization became particularly famous for its live performances called Camp Shows, through which the entertainment industry helped boost the morale of its servicemen and women. Hollywood in general was eager to show its patriotism, and lots of big names joined the ranks of USO entertainers. They entertained in military bases both at home and overseas, often placing their own lives in danger by traveling or performing under hazardous conditions - some losing their lives. During the 1990s it delivered services to 5 million active duty service members and their families and today "continues to be a touch of home to America's troops."