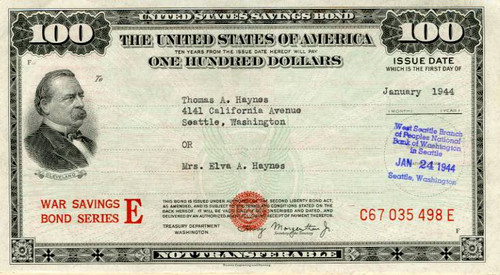 Beautiful Uncancelled United States War Savings Bond Certificate from the United States of America issued no later than 1946. This historic document was printed by the Bureau of Engraving and Printing and has an ornate border around it with a vignette of President, Grover Cleveland. Stamped Was Savings Bond Series E. Printed in orange on back. Printed signature of the Secretary of the Treasury, Henry Morgenthau, Jr. EF. 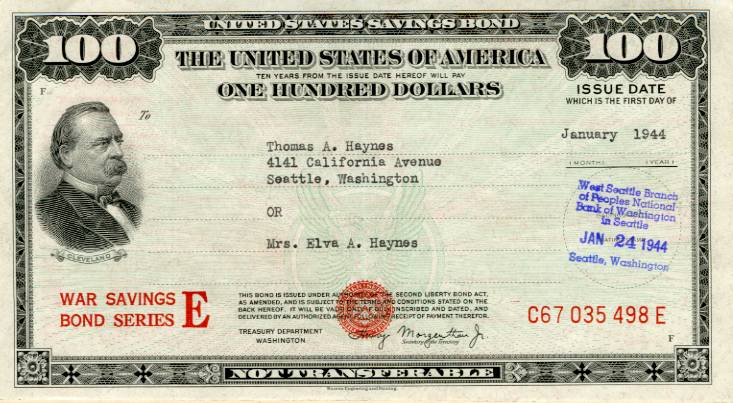 $100 War Bond
On May 1, 1941, the Series E bond was introduced, and with it the start of a national volunteer program. The volunteer program enlisted the nation's financial institutions, community leaders, volunteer committees, and advertising and communications media to promote the new bond. Bankers, business executives, newspaper publishers, Hollywood entertainers, all served to provide the Treasury and the savings bonds program with manpower and support , making the program a success for more than six decades. Of special note are the executives of many Fortune 500 companies who served as members of the U.S. Savings Bonds Volunteer Committee which, from 1963 through 2003, played an essential role in the success of the payroll savings plan. The Series E bond was patterned after its predecessors. It became the most durable of all the series and the world's most widely held security. As the "Defense Bond" of 1941, the "War Bond" of 1942-45 and subsequently just the savings bond- it was purchased by tens of millions of families. Originally issued for a fixed term of 10 years, E bonds were granted interest extensions that brought their interest-bearing lives to 30 or 40 years, dependent upon the issue date of the bond. Millions of Series E bonds continue to earn interest today, although the last E bonds will stop earning interest in 2010. Series E bonds were replaced by the Series EE bond in 1980. History from Encyberpedia and OldCompany.com (old stock certificate research service)