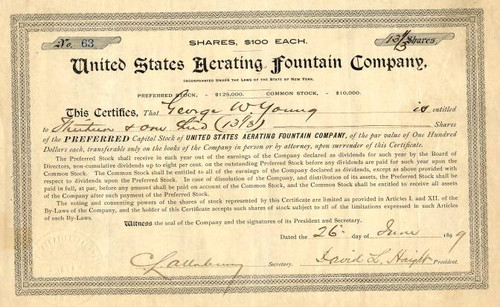 Beautifully engraved certificate from the United States Aerating Fountain Company issued in 1899. This historic document has an ornate border around it. This item has the hand signed signatures of the Company's President, and Secretary, and is over 112 years old. The United States Aerating Fountain Company made a patented device for dispensing aerated liquids and a bottle sealing device. As reported in the American druggist and pharmaceutical record - 1900 A New Apparatus for the Soda Fountain. For druggists who aim to draw vichy. seltzer, carbonic or any of the aerated mineral waters from the fountain under the full pressure of carbonic acid gas, a recent invention of the United States Aerating Fountain Co., 41 Franklin street, Buffalo, with offices at 331 and 333 East Twenty-sixth street, New York City, will appeal very specially. The invention consists of a siphon jet which ran be attached to any style of fountain. The apparatus is exceedingly simple In its construction, consisting of a pendent bulb or globe of extra strong crystal glass reinforced or shielded by silver bands of attractive appearance. When the carbonated water la turned on it is forced into the glass globe, the strong pressure exerted serving to close automatically the outlet pipe, by means of a "shut off" which is pressed down into the orifice as soon as the pressure is applied. The globe being filled with water, charged at the same pressure as that In the fountain, another turn of the screw or handle above creates a partial vacuum, releases the "shut off," and the fully charged water flows out in any quantity desired. With the ordinary system of delivering carbonated waters at the soda fountain the delivery is so forceful, when the water is fully charged, as to prove very wasteful of the carbonic acid gas, and" the glass of mineral water as delivered to the customer is more frequently than not "a stale, flat and unprofitable thing." Company research by OldCompany.com (old stock certificate research service).