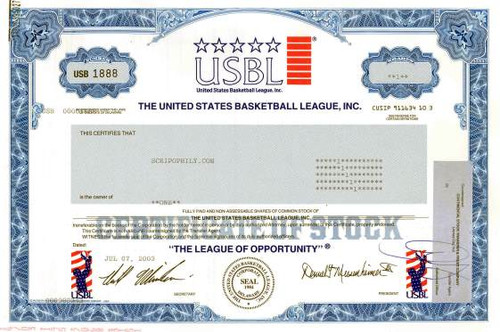 Beautifully engraved certificate from the United States Basketball League . This historic document was printed by the United States Banknote Company and has an ornate border around it with a vignette of the USBL logo. This item has the printed signatures of the Company's President and Secretary.

Certificate Vignette
Since its inaugural season in 1985, the USBL has become known as the "League of Opportunity," launching the careers of almost 150 NBA players. The USBL currently has 11 teams in two divisions - the South and Midwest - with three new teams beginning play during the 2002 season in addition to the Brevard Blue Ducks: the St. Joseph Express, the St. Louis SkyHawks and the Adirondack Wildcats The USBL's season runs from late April through late June, allowing players to finish their collegiate careers and attend NBA rookie and free agent camps. The USBL also attracts pro athletes from other leagues looking to play basketball during the summer season. Minnesota Vikings Pro Bowl receiver Randy Moss of the NFL played with the USBL Champion Pennsylvania Valley Dawgs during the 2001 season. In 1996 the USBL become the first publicly traded sports league, allowing fans to participate in League ownership. Team owners past and present include familiar names in business, professional basketball and entertainment. One of the league's newest owners is "Cedric the Entertainer" (The Steve Harvey Show), part owner of the USBL's expansion team in St. Louis. Other notable owners past and present include Roy Jones Jr., the light heavyweight boxing champion of the world, former NBA pro Artis Gilmore, and Computer Associates founder Charles Wang, owner of the Long Island Surf. USBL Talent in the NBA Throughout its 16-year history, the USBL has earned a reputation as a proving ground for future NBA stars. Past NBA all-stars Mugsy Bogues, Manute Bol, Mario Elie and Spud Webb all got their start with USBL teams. This season, the USBL can boast 27 former players on NBA rosters, including stars Darrell Armstrong of the Orlando Magic, Milwaukee's Anthony Mason and Charlie Ward of the New York Knicks. USBL Commissioner Daniel T. Meisenheimer, III founded the United States Basketball League in December, 1984. At the time he founded the USBL, Meisenheimer was the youngest Commissioner of any professional sports league in history at age 33. Today, the USBL has over 1 million fans nationwide, with attendance growing every year. Over the past thirteen years, Meisenheimer has guided the USBL through its early growth and has established new objectives for the League. In 1996, Meisenheimer helped the USBL become the first publicly traded sports league, allowing fans to participate in league ownership. Other ambitious plans call for measured growth with expansion franchises and consistent upgrading of every USBL franchise as they all become profitable and appreciate over the next few years. As a spokesman for the League, he has appeared on major television networks and has been featured in numerous prominent publications. Before founding the United States Basketball League, Meisenheimer founded Meisenheimer Capital, the parent company of the USBL. The parent company was brought public through an initial offering of public stock in the fall of 1984. Meisenheimer Capital is a venture capital company with interests in three different entities. Meisenheimer has served as President and Chairman of the Board since the company was founded.