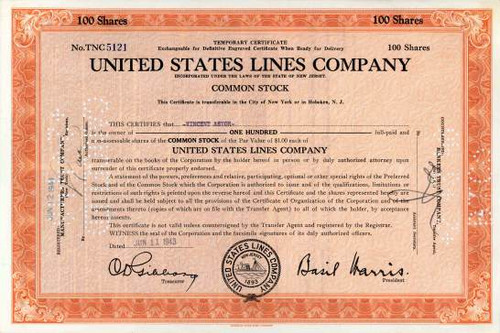 Beautifully engraved certificate from the United States Lines Company issued in 1943. This historic document was printed by the American Banknote Company and has an ornate border around it. This item has the printed signatures of the Company's President and Treasurer and is over 59 years old. This certificate was made out to (but not signed) Vincent Astor (1891-1959), son of the John Jacob Astor who built the well-known hotels, departed markedly from Astor family conservatism. Vincent Astor in New York City. After attending Harvard, he served in the United States Navy in both world wars. Under his direction the family real estate holdings underwent significant change. Major portions of Astor property in the heart of New York City were sold, including the site for the Empire State Building. William Vincent Astor died in New York City on Feb. 3, 1959. He sold some Astor-owned properties to New York City under generous terms so that they might be converted into housing projects. In addition, he backed the New Deal, though temporarily, and supported other social reforms. He took an active role in managing the family real estate holdings, and during the last two decades of his life headed the corporation that published Newsweek magazine. He willed most of his fortune to the Vincent Astor Foundation. John Jacob Astor (1864-1912) life was cut short when he perished in the mid-Atlantic aboard the Titanic. The parent compay of the Titanic was International Mercantile Marine. Ironically, the United States Lines acquired International Mercantile Marine in 1943 which was the year this certificate was issued.