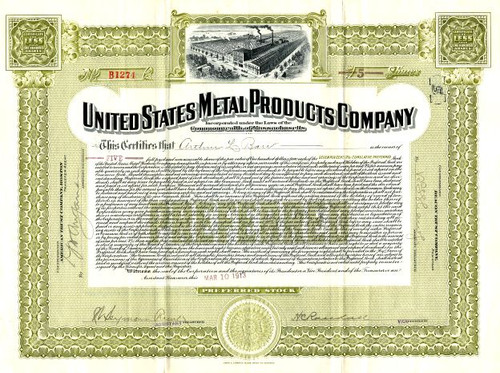 Beautiful certificate from the United States Metal Products Company issued in 1913. This historic document was printed by John A. Lowell Bank Note Company and has an ornate border around it with a vignette of a factory. This item has been hand signed by the Company's Vice-President, and Assistant Treasurer, and is over 98 years old.

Certificate Vignette
Reported on November 6, 1913 United States Metal Products Company's New Officers.--At a meeting of directors of the United States Metal Products Company, College Point, Long Island, N. Y., A. B. Turner, of Turner, Tucker & Co., bankers, 111 Broadway, New York, was elected president VV. T. Smith, formerly vice-president of the ThompsonStarrett Company, was elected vice-president and general manager, and A. M. Bowers was elected secretary and treasurer. It is stated that Mr. Smith, who is an expert on organization work, has been given full power to put into effect whatever changes he may deem necessary. Drastic cuts are being made in overhead charges. It is understood that the company is in much better condition than was at first believed, and that it may not be found necessary to call on the syndicate which was formed to advance what money the company might require. It has on its books $600,000 in unfilled orders, which will take more than six months to fill. Stock research by OldCompany.com (old stock certificate research service).