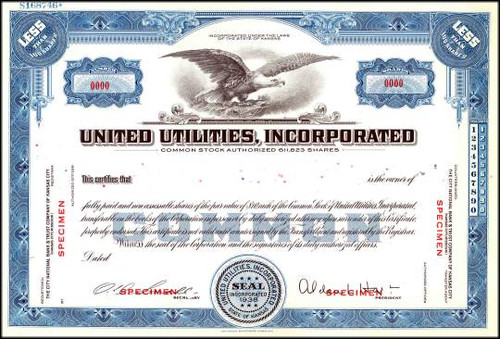 Beautifully engraved SPECIMEN certificate from the United Utilities, Incorporated. This historic document was printed by the Security Banknote Company and has an ornate border around it with a vignette of an eagle. This item has the printed signatures of the Company's President and Secretary.

Certificate Vignette
United Telecom was founded in 1899, by C.L. Brown and Jacob Brown, to deploy reliable, reasonably-priced telephone service to the rural area around Abilene. At the time, Bell service was expensive and poorly managed in rural towns. The Browns installed their first long-distance circuit in 1900, and chartered their own company, the Brown Telephone Company, in October 1902. In March 1903, they joined with 14 other Kansas independents to incorporate the Union Telephone and Telegraph Company, which would provide long-distance service to Kansas City. In September 1911, C.L. Brown consolidated the Brown Telephone Company with three other independents to form a new alliance and the second largest telephone company in Kansas, the United Telephone Company, which controlled seven major telephone exchanges. He formed United Telephone and Electric (UT&E) in 1925 in order to purchase stock in subsidiary companies across widely scattered geographical areas, eventually controlling more than 68 other companies. More than two-thirds of these were telephone companies. The Great Depression caused more than three million telephone subscribers to give up their phone service between 1931 and 1933. Consequently, UT&E suffered severe financial strain and had to seek protection to reorganize under the bankruptcy laws. All but six of his 85 companies, all battered by hard times, survived and some were showing profits again in 1936. During the reorganization, a number of companies were merged and later phased out. The reorganization plan received final approval in late 1937. UT&E was dissolved, and its assets placed under the new company, United Utilities, Incorporated. Much of the credit for the basic soundness of UT&E must go to C.L. Brown. Over 30 years, he had built a reputation as a competent telephone and utility manager. Later, in 1964, when Paul H. Henson a 1995 KBHF Contemporary Honors Award recipient became president of United Utilities, Inc., he almost immediately reorganized the company in accordance with C.L. Brown's belief that centralizing some of the company's functions would result in greater efficiency, cost reductions, and growth. In 1972, United Utilities changed its name to United Telecommunications. United Telecommunications was also known as United Telecom. In 1992, United Telecommunications adopts the nationally recognized identity of its long distance unit, changing its name to Sprint Corporation. Sprint is a global communications company serving 23 million business and residential customers in more than 70 countries. With more than 80,000 employees worldwide and $23 billion in annual revenues, Sprint is widely recognized for developing, engineering and deploying state-of-the-art network technologies, including the United States' first nationwide all-digital, fiber-optic network. Sprint's award-winning Tier 1 Internet backbone is being extended to key global markets to provide customers with a broad portfolio of scaleable IP products. Sprint's high-capacity, high-speed network gives customers fast, dependable, non-stop access to the vast majority of the world's Internet content. Sprint also operates the largest 100-percent digital, nationwide PCS wireless network in the United States, already serving the majority of the nation's metropolitan areas. Founded in 1899, the company maintains its world headquarters in Kansas City. Sprint is comprised of the FON Group and the PCS Group, representing the company's wireline and wireless businesses. The FON Group represents Sprint's core wireline telecommunications operations, which include long distance voice/data/Internet, international voice and data, local telephone, and product distribution and directory publishing businesses. It also includes activities related to the development of Sprint Integrated On-Demand Network (Sprint ION®), fixed wireless services and certain other ventures. The Sprint PCS Group consists of Sprint's wireless personal communications services operations approaching 100% nationwide PCS coverage. About Specimens Specimen Certificates are actual certificates that have never been issued. They were usually kept by the printers in their permanent archives as their only example of a particular certificate. Sometimes you will see a hand stamp on the certificate that says "Do not remove from file". Specimens were also used to show prospective clients different types of certificate designs that were available. Specimen certificates are usually much scarcer than issued certificates. In fact, many times they are the only way to get a certificate for a particular company because the issued certificates were redeemed and destroyed. In a few instances, Specimen certificates we made for a company but were never used because a different design was chosen by the company. These certificates are normally stamped "Specimen" or they have small holes spelling the word specimen. Most of the time they don't have a serial number, or they have a serial number of 00000. This is an exciting sector of the hobby that grown in popularity and realized nice appreciation in value over the past several years.