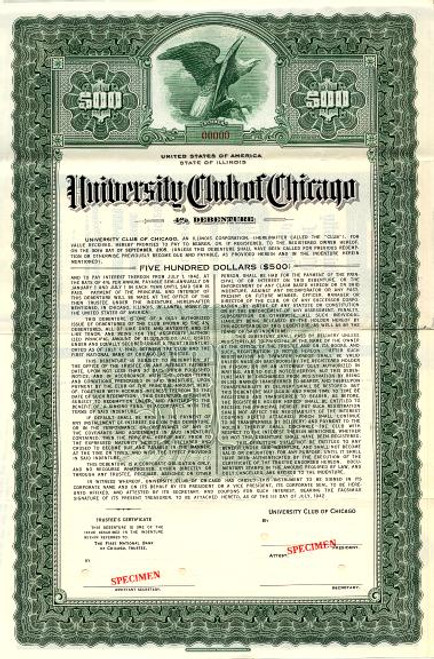 Beautiful engraved rare specimen certificate from the University Club of Chicago dated in 1942. This historic document was printed by Western Bank Note and Engraving Company and has an ornate border around it with a vignette of an eagle. This item has the printed signatures of the Company's President and Secretary and is over 69 years old. Coupons attached. 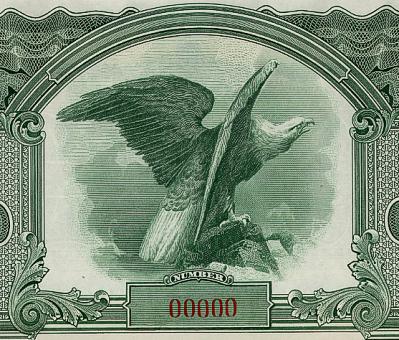 Certificate Vignette
The University Club of Chicago, located at 76 East Monroe Street at the corner of Michigan Avenue in downtown Chicago, Illinois is a private social club. It received its charter in 1887, when a group of college friends, principally alumni of Harvard, Yale, and Princeton, founded the club hoping to further their collegial ties and enjoy intellectual pursuits. Though officially chartered in 1887 by university graduates for "the promotion of literature and art, by establishing and maintaining a library, reading room and gallery of art, and by such other means as shall be expedient and proper for such purposes", the University Club of Chicago's history begins in 1885 when a group of Harvard men formed an association of college alumni in a similar fashion to the University Club of New York. The primary requirement of admission remains a college or university degree. The club's first home was on the third and fourth floors of the Henning & Speed Building at 22 West Madison Street. The second club home was a stand-alone building at 30 North Dearborn. The first committee on literature and art was established in 1895, the library in 1897 with 1000 volumes. Honored guests included Admiral George Dewey (1900) and Winston Spencer Churchill (1901). The club's present building, begun in 1907 and completed in 1909, is a historic landmark designed by renowned architect Martin Roche. It is arguably the first and foremost "gothic skyscraper". At a cost of over $1,100,000, it was one of the most important club buildings of its day and continues to be an architecturally significant structure. The club's centerpiece, Cathedral Hall, was designed by Martin Roche, based on Crosby Hall in London. The Hall is adorned with stained glass windows (by artist Frederic C. Bartlett) and seals representing distinguished universities in the United States and Europe. "There are other historically great interiors in town: Auditorium Theater of Adler & Sullivan and Mies van der Rohe's Crown Hall are only two of the first to come to mind. But among places where people convene to enjoy good food and companionship, I can think of no single room in this wonderfully composed and constructed city that is more stunning, that clears the sinuses more speedily or whips the viewer more persuasively into social attention than Martin Roche's Cathedral Hall."[1] Other facilities include: private dining rooms, restaurants, international squash courts, bath department and pool, fitness facilities, library, business centre, outdoor terrace, art gallery, overnight accommodations all available to members and their guests. The club has played a key role in the development of squash in Chicago and the U.S., including hosting the annual Windy City Open each year. History from Wikipedia and OldCompany.com (old stock certificate research service). About Specimens Specimen Certificates are actual certificates that have never been issued. They were usually kept by the printers in their permanent archives as their only example of a particular certificate. Sometimes you will see a hand stamp on the certificate that says "Do not remove from file". Specimens were also used to show prospective clients different types of certificate designs that were available. Specimen certificates are usually much scarcer than issued certificates. In fact, many times they are the only way to get a certificate for a particular company because the issued certificates were redeemed and destroyed. In a few instances, Specimen certificates we made for a company but were never used because a different design was chosen by the company. These certificates are normally stamped "Specimen" or they have small holes spelling the word specimen. Most of the time they don't have a serial number, or they have a serial number of 00000. This is an exciting sector of the hobby that grown in popularity over the past several years.