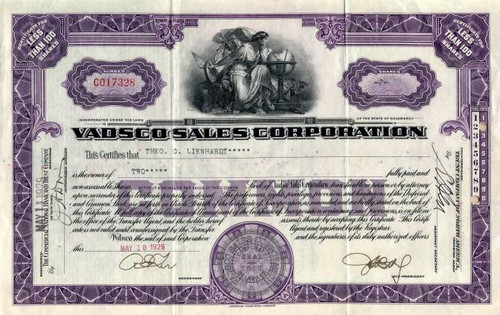 Beautiful certificate from the Vadsco Sales Corporation issued in 1929. This historic document was printed by the American Bank Note Company and has an ornate border around it with a vignette of an allegorical woman sitting next to a globe. This item has the original signatures of the Company's Vice President, and Secretary, and is over 84 years old. 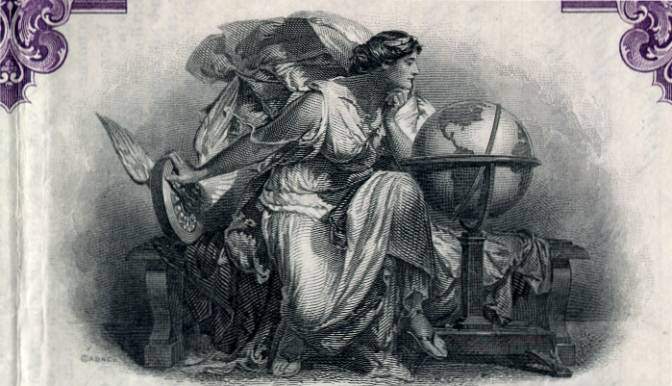 Certificate Vignette
Vadsco Sales was a holding company for makers of perfumes, toiletries, drugs, etc., which was formed in New York City in the 1920s. V. Vivaudou, an auto company and perfume manufacturer, was one of its subsidiaries. The Vadsco Sales Corporation was a consolidation (business) of V. Vivaudou, Inc., the American Druggists Syndicate, and Kny Scheerer Corporation. The latter firm was among the oldest and largest manufacturers and dealers of surgical and hospital supplies and equipment in the United States. Additional companies included in the December 1928 merger which formed Vadsco Sales were the Alfred H. Smith Company, Farfumerie Melba, Inc., Delettrez, Inc., and Kleanwell, Inc. Each of the individual businesses retained its trade name and its trademark. The merger of Delettrez, Inc., and its parent company, Vadsco Sales, in April 1943, resulted in the creation of Universal Laboratories. History from Encyberpedia and OldCompany.com (old stock certificate research service)