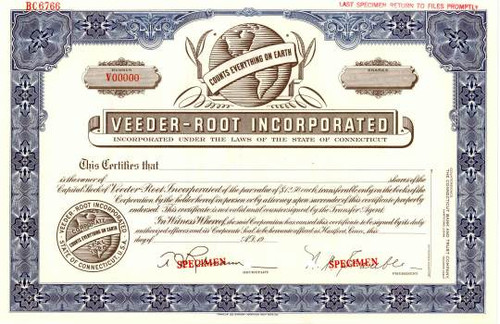 Beautifully engraved SPECIMEN certificate from the Veeder - Root Incorporated. This historic document was printed by the American Banknote Company and has an ornate border around it with a vignette of the company logo. This item has the printed signatures of the Company's President and Secretary.

Certificate Vignette
In 1928, the Root and the Veeder Companies merged to form Veeder-Root, Incorporated of Hartford, Connecticut, the largest manufacturer of counting and computing devices in the world. While the majority of Veeder-Root's customers used the counters to control manufacturing processes, in the early 1930s, one customer had the foresight to incorporate a Veeder-Root counter into his gasoline pump. This innovation introduced Veeder-Root to the petroleum industry and marked its beginning as a petroleum technology leader. These new mechanical computers allowed gas station attendants to "fill"er up" without having to calculate cash sales as they pumped gas. Through the 1940s, 1950s and 1960s, Veeder-Root counters went through many changes because of wartime material shortages, growing competition and the addition of tenths of cents to the counters. Through these decades of change, Veeder-Root mechanical computers could be found on more than 90 percent of U.S. and Canadian gasoline pumps. Veeder-Root is the world's leading supplier of automatic tank gauging and fuel management systems and one of the few companies in the industry to design, manufacture and service its own products. Veeder-Root presently has tank monitoring systems in more than 500,000 underground storage tanks around the globe. Veeder-Root is headquartered in Simsbury, Connecticut, and employs more than 600 people worldwide. Tank gauging systems are manufactured in the company's ISO 9000 certified 160,000 square-foot facility in Altoona, Pennsylvania. Veeder-Root products are available through more than 200 distributors in North America. With subsidiaries in the United Kingdom and Brazil and sales offices throughout the world, Veeder-Root's systems have been installed across Europe, Asia, and South and Central America. Veeder-Root products and services are being used to meet the regulatory compliance and business management requirements of major oil companies, large truck fleets, car rental companies, airports, package delivery companies, federal, state and local governments, public utilities, industrial companies, and thousands of small underground and aboveground storage tank owners. About Specimens Specimen Certificates are actual certificates that have never been issued. They were usually kept by the printers in their permanent archives as their only example of a particular certificate. Sometimes you will see a hand stamp on the certificate that says "Do not remove from file". Specimens were also used to show prospective clients different types of certificate designs that were available. Specimen certificates are usually much scarcer than issued certificates. In fact, many times they are the only way to get a certificate for a particular company because the issued certificates were redeemed and destroyed. In a few instances, Specimen certificates we made for a company but were never used because a different design was chosen by the company. These certificates are normally stamped "Specimen" or they have small holes spelling the word specimen. Most of the time they don't have a serial number, or they have a serial number of 00000. This is an exciting sector of the hobby that grown in popularity and realized nice appreciation in value over the past several years.