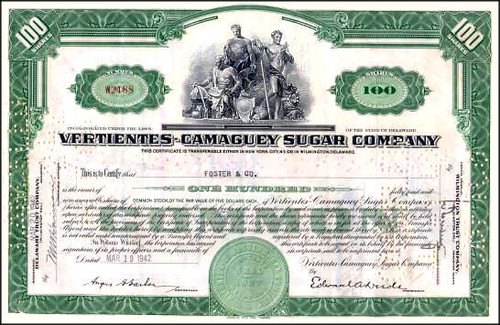 Beautifully engraved Certificate from the famous Vertientes - Camaguey Sugar Company of Cuba issued no later than 1949. This historic document was printed by the American Banknote Company and has an ornate border around it with a vignette of three allegorical men. This item has the printed signatures of the company's officers and is over 68 years old. This is a famous sugar company that was nationalized when Castro took over in Cuba. 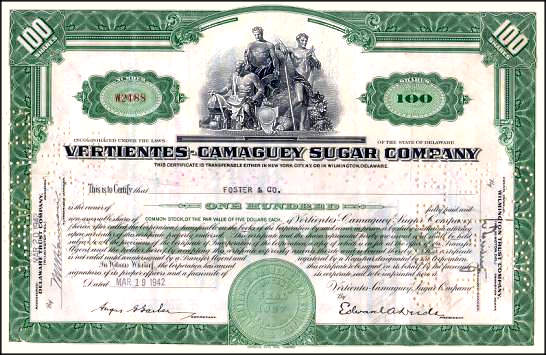 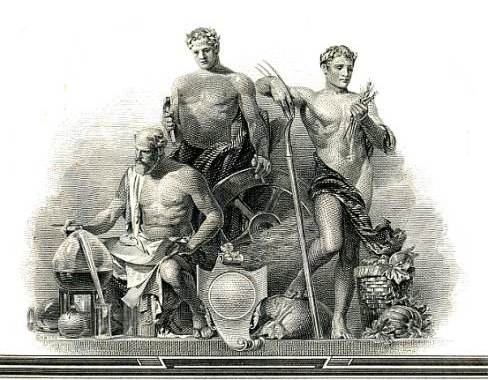 Certificate Vignette
In 1959, Castro nationalized all US-owned companies and by establishing closer economic and political ties with the Soviet Union. Among the companies that were nationalized, was Compania Azucarera Vertientes-Camaguey de Cuba (C.A.V.), a Cuban corporation whose stock was mostly owned by U.S. residents .Washington began an economic blockade and cut off diplomatic relations in January, 1961. The Vertientes - Camaguey Sugar Company of Cuba was a result of a reorganization of the Vertientes Sugar Company in 1937 and the Vertientes - Camaguey Sugar Company in 1942. The Vertientes Sugar Company was incorporated under the laws of Cuba in 1914. In 1924 they owned two modern mills and about 629,000 acres of land. They we able to grind over 735,000 bags of sugar with a plan to increase porduction in the 1920's to over 1.150 million bags. History of Sugar in Cuba - Sugar cane, originating in Asia, was brought to southern Spain by the Arabs, hence it passed to the Canary Islands, of Cape Verde and Madeira, where it was being cultivated at the time of the conquest of America. In his second voyage to the Antilles, Christopher Columbus took it to La Hispaniola (Santo Domingo) where it was first planted in 1493. The first sugar factory or mill was established in that island in 1516. In Cuba, sugar cane was introduced during the rule of its first Governor, Diego Velazquez (1511-1524). From that time on, it was cultivated in the island, but no sugar mill was established until the last lustrum of the XVI century. At that time the Cuban sugar industry was based on the granting of certain privileges1 monetary aid from the Crown, and the authorization to import slaves. During the XVII century and the greater part of the XVIII the industry developed very slowly, so much so that in 1760 it was employing the same number of slaves as a century and a half before in 1595. The capture of Havana by the English (1762) gave some impetus to the sugar industry through the introduction of thousands of slaves at less cost than until then and the cheapening of the utensils and materials used in the mills due to free importation thereof. Later, the opening of Spanish ports to foreign sugars stimulated the development of the sugar industry from 1783. Sugar production grew without interruption up to 1779, and Cuba supplied Spain with practically all the sugar necessary for the latter's consumption, some 125,000 quintals or hundredweights per year (50,000 bags of 250 lb.). Towards the close of the XVIII century, a series of historical events gave Cuban sugar a strong push. Chief among them was the revolution and independence of Haiti in 1804. The ruin of the sugar industry of that country, at the time the. world's greatest producer, opened a new era for Cuba's sugar industry. Beginning in 1818, when Spain decreed freedom for foreign trade, Cuba took its place as the world's greatest sugar producer. During the XIX century Cuba's sugar industry developed intensely, based on the introduction of the steam engine, whose use became general in the third decade of the century; on the building of railways starting in 1837; on the advances in the manufacture of sugar and the cultivation of sugar cane; on the free importation of slaves, first in 1799; and on the substitution of slave labor for paid labor (1880-1885); on the competition of beet sugar; and on the transformation of the mills into "centrals", with ample supply of capital, abundant applications of technical know-how, and the division between industrial and agricultural labor, with the establishment of the "Colono" or cane grower. During that century, in spite of the Ten Years War of Independence, sugar production grew notably in Cuba, increasing almost five-fold from 1850 (223,145 Spanish long tons) up to 1894 (1.054,214 tons). The Second War of Independence (1895-1898) saw a great recession in sugar production which in 1897 was a mere 212,051 tons, less than that during the middle of the century. Independence facilitated the reorganization of the sugar industry on more advantageous bases than those of the XIX century. The doors of the United States market were opened; materials used by the industry were cheaper; communications, both by rail and road, were greatly increased; yellow fever was eliminated thanks to the great discovery of Cuban scientist, Dr. Carlos J. Finlay; access was given to strong current of European immigration; and the investment of foreign capital in the sugar industry, particularly U.S. capital, was huge; so much so that from an estimated 50 million dollars in 1895 they increased to 700 million dollars in 1929. All these favorable factors brought about a rapid development of the Cuban sugar industry during the first quarter of the century. In 1913 production for the first time passed the figure of 2 million Spanish long tons; in 1910 it passed 3 million tons; in 1919 that of 4 million tons, and in 1925 it soared to 5 millions tons, thus quintuplicating in five lustrums the maximum production obtained during the previous century. Beginning in 1926, sugar entered into a crisis of over-production in the whole world and Cuba started restricting its sugar crops. The crisis, and the high tariff of two cents per pound for sugar in the United States (1930) brought about a vertical decline in the island's sugar production. In 1933 production reached only 1,994,238 Spanish long tons. Cuba did not produce a 5 million ton crop until 1947, and in 1952 a production of 7,011,637 tons was recorded. History from OldCompany.com (old stock certificate research service).