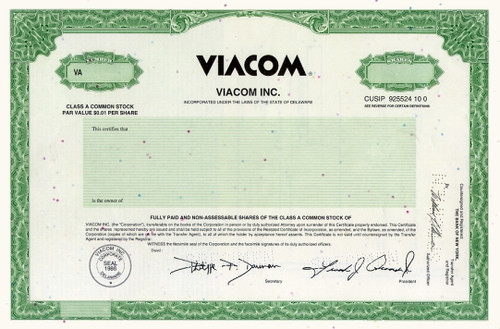 Beautifully engraved specimen certificate from the Viacom Inc. . This historic document has an ornate border around it with a vignette of the company's name in large block letters. This item has the printed signatures of the company's president and secretary. Viacom is a leading force in nearly every segment of the international media marketplace. The operations of Viacom include Blockbuster, MTV Networks, Paramount Pictures, Paramount Television, Paramount Parks, Showtime Networks, Simon & Schuster, 19 television stations, and movie screens in 12 countries. Viacom also owns 80% of Spelling Entertainment Group, as well as half-interests in Comedy Central, UPN and UCI.