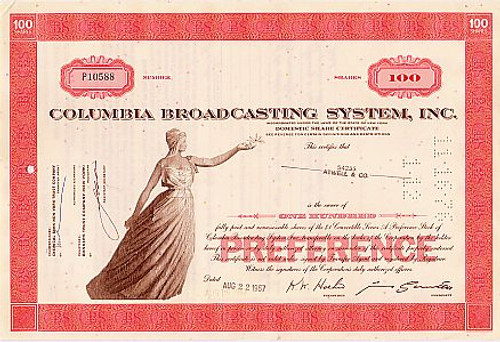 Beautifully engraved certificate from CBS Inc. issued in 1975. This historic document has an ornate border around it. This item has the printed signatures of the Company's President (Arthur R. Taylor) and Secretary and is over 45 years old. CBS began in 1927 and was then known as Columbia Phonograph Broadcasting System. It began owning merely sixteen stations, but only six years after the corporation began, the network had grown to own ninety one stations. CBS was also owned and operated by Westinghouse Electric Corporation, when the company bought them in late 1995. In June 1996, CBS Radio was made part of Infinity Broadcasting, and then "spun off" as a CBS subsidiary. In December 1997, Westinghouse is officially renamed CBS Corporation. In 2000, CBS and Infinity Broadcasting was acquired by Viacom.