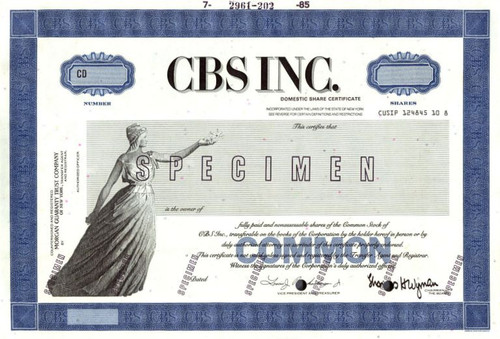 Beautifully engraved Rare Specimen Certificate from the Columbia Broadcasting System, Inc.. This historic document has an ornate border around it with a vignette of a Victorian era allegorical woman holding electrons circling an atom in her hand. This item has printed signatures by the Company's President and Treasurer. The Blue certificate has the large print of the word SPECIMEN printed on the face. The older green and orange certificates only have it printed over the signatures. 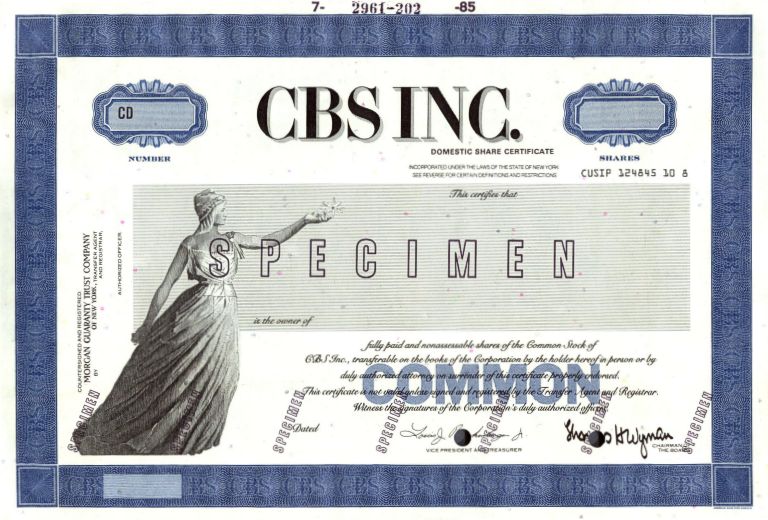 Certificate
CBS began in 1927 and was then known as Columbia Phonograph Broadcasting System. It began owning merely sixteen stations, but only six years after the corporation began, the network had grown to own ninety one stations. CBS was also owned and operated by Westinghouse Electric Corporation, when the company bought them in late 1995. In June 1996, CBS Radio was made part of Infinity Broadcasting, and then "spun off" as a CBS subsidiary. In December 1997, Westinghouse is officially renamed CBS Corporation. In 2000, CBS and Infinity Broadcasting was acquired by Viacom. About Specimens Specimen Certificates are actual certificates that have never been issued. They were usually kept by the printers in their permanent archives as their only example of a particular certificate. Sometimes you will see a hand stamp on the certificate that says "Do not remove from file". Specimens were also used to show prospective clients different types of certificate designs that were available. Specimen certificates are usually much scarcer than issued certificates. In fact, many times they are the only way to get a certificate for a particular company because the issued certificates were redeemed and destroyed. In a few instances, Specimen certificates we made for a company but were never used because a different design was chosen by the company. These certificates are normally stamped "Specimen" or they have small holes spelling the word specimen. Most of the time they don't have a serial number, or they have a serial number of 00000. This is an exciting sector of the hobby that grown in popularity and realized nice appreciation in value over the past several years