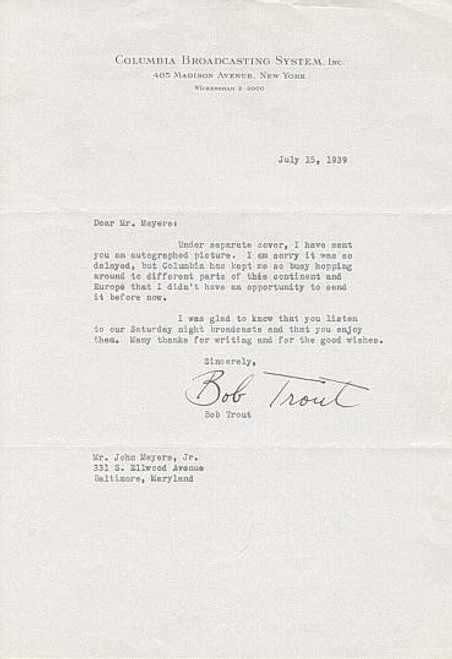 Columbia Broadcasting Systems, Inc. Letter signed by Bob Trout dated July 15, 1939. This item is hand signed by Bob Trout and is over 61 years old. In 1938, CBS WORLD NEWS ROUNDUP, was the first international radio news broadcast, established with correspondents Edward R. Murrow reporting from Vienna, William L. Shirer from London and other newsmen from Paris, Berlin and Rome -- Paul Manning, John Daly, Bob Trout. The only news program on the CBS network schedule during the summer of 1938 was that of commentator Boake Carter, who was heard nightly at 745 pm Eastern for General Foods. There were five-minute 730am and 11pm news periods over WABC only, but this was "rip and read" Press-Radio Bureau material read by a staff announcer. (During this period, Bob Trout was occupied with staff announcer duties in New York, handling the announcing chores on "Professor Quiz." Murrow and Shirer were still in Europe, arranging occasional special cultural broadcasts thru the summer.) In late August or early September Bob Trout was assigned to a nightly 15 minute network news block, heard from 630 to 645pm Eastern, and entitled "Today with Bob Trout." This was not a European roundup, but rather a daily studio summary of news and events, with occasional studio interview guests. Limited though the format was, however, it appears to have been CBS's first in-house attempt at a meaningful nightly newscast since the abortive "Columbia News Service" project in 1933. In September 1938, the Sudeten Crisis brought the focus back to news, and CBS returned to the "roundup" idea on 9/12, broadcasting a half-hour "tour of world capitals" from 730 to 8 pm. Between 9/13 and 9/30, thirteen additional roundups were heard -- but, significantly, these were not heard in regularly scheduled time periods. On some days, no roundups were heard, on other days two were aired, and rarely was there any continuity in the time slot -- the reports were dropped into whatever open period could be found, whenever atmospheric conditions allowed the reports to get thru. (It's important to add here that CBS's overseas coverage during this crisis was significantly compromised by poor atmospheric conditions over the Atlantic. NBC developed an alternate shortwave route which avoided the storms, and for much of the Crisis, its coverage was far easier to follow.) Once the crisis calmed, CBS went back to its limited schedule of news, with "Today with Bob Trout" its only nightly network news period, supplemented by local Press-Radio Bureau broadcasts. This schedule continued well into 1939. Unscheduled roundups reappeared during mid-August 1939, at the time of the Polish Corridor dispute, and these finally became a regular nightly series in early September, replacing "Today with Bob Trout," and moving to 645pm as "European News Roundup," aka "The News From Europe Direct From Europe." The 630 to 645 period was taken over by H. V. Kaltenborn for a nightly period of commentary, giving CBS for the first time in its history a solid half-hour block of nightly news. A morning edition of the "European News Roundup" was also scheduled from 8 to 815 am Eastern