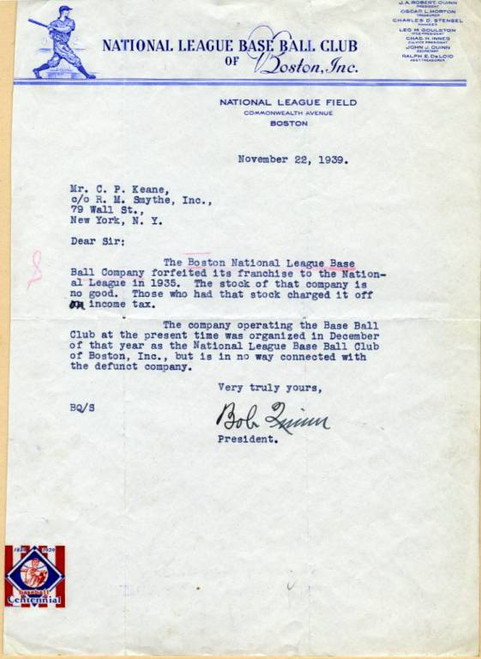 Historic letter from the National League Base Ball Club of Boston, Inc. (Bost Braves) sent to R. M. Smythe, Inc. on November 22, 1939. This historic document has the club's logo on top and a seal celebrating the Baseball Centennial from 1839-1939. This letter was signed by the company's president, Bob Quinn (James Aloysius Robert Quinn). Letterhead shows company's officers, including Casey Stengal as Manager. Trimmed, otherwise EF. 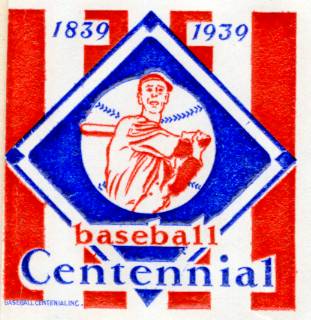 Letterhead showing Casey Stengal as Manager
James Aloysius Robert Quinn (February 14, 1870 March 12, 1954) was an American executive in Major League Baseball who became renowned for his management of four different franchises. Born in Columbus, Ohio, he was a catcher in minor league baseball during the 1890s, also managing some of the teams for which he played. From 1902 to 1917, he served as general manager of the Columbus Senators in the American Association; he was also among the founders of that league. In 1908 he founded and was president of the Ohio State League, a Class D minor league which began operation as a six team league with teams located in Central/Southern Ohio. He became general manager of the St. Louis Browns from 19171922, developing the perennially poor team into one which lost the 1922 American League pennant by a single game. In 1923, Quinn led a group that purchased the Boston Red Sox, and as team president he worked to restore the credibility of a franchise whose best players had been sold off by previous owner Harry Frazee. The group included businessman and former president of the Columbus Senators, Edward Schoenborn and Columbus physician Robert B. Drury, who had put himself through medical school playing and managing in the minor leagues in the early 1900s. However, the most important member of Quinn's ownership group, St. Louis millionaire Palmer Winslow, died in 1927. For the remainder of Quinn's tenure as Bosox owner, the team was severely underfinanced. Largely as a result, Quinn's tenure as owner was, statistically speaking, the darkest in franchise history. In 10 years, the Red Sox never finished higher than sixth, and were no closer than 25 games out of first. They finally bottomed out in 1932, with a ghastly 43-111 record that is still the worst in franchise history. Just before 1933 spring training began, Quinn sold the Red Sox to Tom Yawkey. Quinn became general manager of the Brooklyn Dodgers in 1934-1935. He then joined the Boston Braves as team president and part owner from 1936 to 1945. After his 1945 retirement, he briefly served as a sporting goods executive, and then became president of the Baseball Hall of Fame from 1948 to 1951, leaving that position after suffering two strokes. Quinn died at age 84 in Providence, Rhode Island, and was buried near Columbus. His son John J. Quinn served as general manager of the Braves following his father's retirement, continuing after the team moved to Milwaukee in 1953, and later served as GM of the Philadelphia Phillies. His grandson Bob Quinn served as general manager of the New York Yankees, Cincinnati Reds, and San Francisco Giants between 1988 and 1996, and his grandson Jack Quinn served as general manager of the St. Louis Blues franchise in the National Hockey League. His great-grandson Bob Quinn (born 1968) is the current executive vice president - finance and administration and chief financial officer of the Milwaukee Brewers History from OldCompany.com and SavingsBonds.pro (collectible Savings Bonds website)