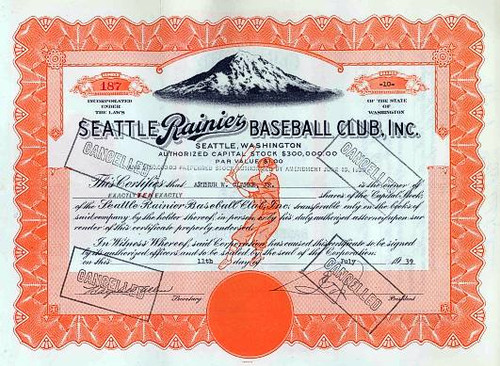 Beautifully engraved Certificate from the Seattle Rainier Baseball Club, Inc issued in 1939. This historic document was printed by the Far West Company and has an ornate border around it with a vignette of Mt. Rainier with an underprint of a baseball player. This item is hand signed by the Company's President (Emil Sick) and Secretary and Secretary and is over 72 years old.

Certificate Vignette
Emil Sick who purchased the team in 1937, named the team after his beer company, Raineer Beer. A new stadium was built on the corner of Rainier Avenue and McCelland Street in Seattle, the same site of old Dugdale Park. On opening night of June 15, 1938, 12,000 fans arrived at the new state-of-the-art stadium, along with others on a grassy knoll beyond left field. The biggest event of 1938 would be by a local pitcher named Fred Hutchinson. A record 17,000 fans attended the game to see this 19 year-old win his 19th game of the year. He would end up winning 25 games that year and lead the Rainiers to a second place finish. Needing speed and defense to compete in the new park, the Rainiers sold Hutchinson to the Detroit Tigers for $50,000 and four players. Two of those players did what Sick wanted, Jo Jo White and George Archie. During this time the Rainiers built winners. Along with White and Archie, they had players such as Dick Gyselman, Earl Torgeson, Edo Vanni, Les Scarella, and Alan Strange. From 1940 to 1942 the Rainiers were PCL champions and heroes of Seattle. However after the 1940 season the team lost their manager. While at a Harlem Globetrotters game, Lelivelt suffered a fatal heart attack. The Yankees suggested the Rainiers hire Bill Skiff as manager. His first year was just like Lelivelt's last, they became PCL champions of 1941. After 1942 the Rainiers didn't win a pennant but did see exciting baseball. Bill Lawrence amazed the crowds with his defensive skills; Hal Turpin pitched a no-hitter in 1942 and went on to win 23 games that year; and Kewpie Barrett ended his career with 234 wins and 1866 strikeouts in 25 years. In 1951, Seattle brought out to the west coast the great Rogers Hornsby to manage the team. His only year as manager was a success, a PCL championship. Then in 1955 Fred Hutchinson came home to manage the Rainiers to another championship pennant. During this time the PCL was growing tired of being classified as a minor league. They were producing some players that would go on and become some of the all-time greats, Joe Dimaggio and Ted Williams along with other players with respectable careers. In 1952 the league was granted "Open Classification", meaning no team had a working agreement with any major league club and any player moving from league to league would have to clear waivers. This was the beginning that the PCL hoped would lead to a major league status. As the PCL continued to discuss the idea of becoming a rival league, Major League baseball moved two of its teams to the coast. It was announced in 1957 that the Dodgers and Giants would move to Los Angeles and San Francisco. This brought the PCL back to a Triple-A status and the Rainiers began a working agreement with the Cincinnati Reds. Due to the change to Triple-A and the expanding coverage of major league baseball on television, the Rainiers attendance began to drop. No longer did the PCL run as its own league, but it now had to bow to the wishes of the parent club. As players began to improve their game, they would be called up to the majors. Due to this and Sick's old age, he sold his team to the Boston Red Sox in 1961. Sick later died in 1964. In 1965 the Red Sox sold the team to the California Angels and the Rainiers were no more. When the Red Sox bought the team they decided to keep the local name, however the Angels wanted their AAA team to reflect the parent club and they became the Seattle Angels.