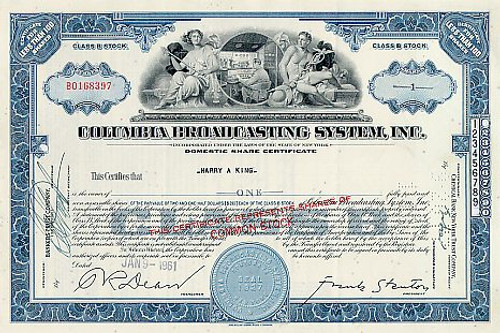 Beautifully engraved Certificate from the CBS Columbia Broadcasting System issued in the 1960's. This historic document was printed by the American Banknote Company and has an ornate border around it with a vignette of two allegorical figures bordering an old radio station in the background. This item has the printed signatures of the company's officers and is over 37 years old.

Certificate Vignette
Since the sign on of the first commercial radio station, KDKA Pittsburgh, in 1920, the radio industry has enjoyed tremendous popularity, provided listeners with endless hours of entertainment and information, and played a valuable role in the making of history. Radios ubiquitousness and immediacy made it the place most people heard about such historical events as the crash of the Hindenburg zeppelin at Lakehurst, N.J., the Japanese attack on Pearl Harbor, the landing of Allied troops at Normandy during World War II, and, more recently, the Three Mile Island nuclear accident and the space shuttle Challenger disaster. CBS began in 1927 and was then known as Columbia Phonograph Broadcasting System. It began owning merely sixteen stations, but only six years after the corporation began, the network had grown to own ninety one stations. CBS is currently owned by Viacom. Viacom is the world's #3 media company (behind AOL Time Warner and Walt Disney) and includes movies, television, radio, and the Internet. It owns BET (Black Entertainment Television), CBS, Paramount Pictures, the United Paramount Network (UPN), MTV Networks (MTV, VH1, Nickelodeon), Showtime Networks, and Comedy Central (50%), and produces and syndicates TV shows through Paramount Television and CBS Enterprises. Viacom also owns 34 CBS and UPN TV stations, publisher Simon & Schuster, and 82% of Blockbuster (the #1 video rental chain), and has dozens of Internet holdings. The company also owns Infinity Broadcasting (some 185 radio stations). Chairman and CEO Sumner Redstone controls 68% of the firm.