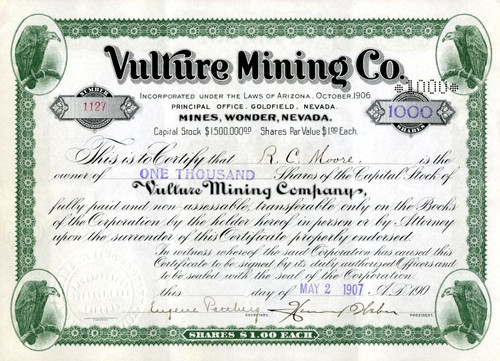 Beautiful uncancelled stock certificate from the Vulture Mining Company issued in 1907. This historic document was printed by Clark Engraving and Printing, Milwaukee and has an ornate border around it with a vignette of a vulture in each corner. This item has the signatures of the Company's President, Henry Weber and Secretary, Eugene Patthery. 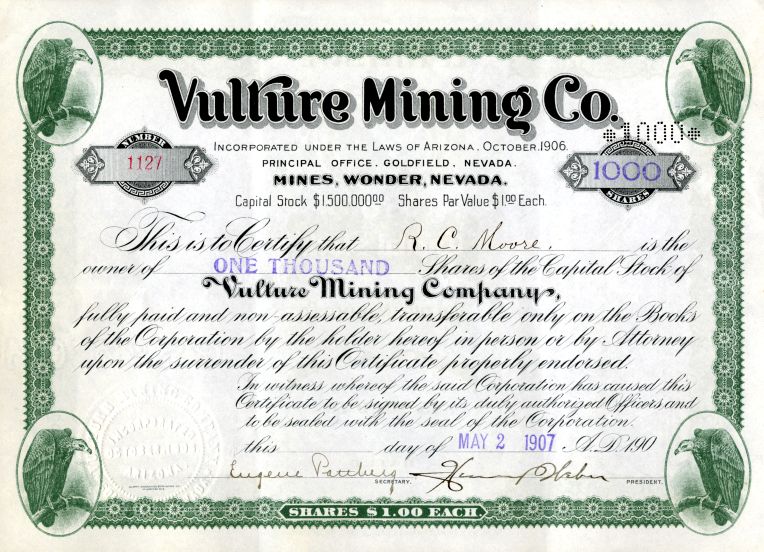 Certificate
Mining and Engineering World, Volume 27 - 1907 That the Wonder camp has one of the best showings in the state is acknowledged by mining men generally. All during the spring and summer months the mines have been steadily operated on the large ore-bodies known to exist. While there is plenty of high-grade ore in Wonder it is not a camp which will be developed by leasers as nearly all of the companies of consequence are developing their own ground and it is expected that they will continue to do so. Development of the Nevada Wonder has progressed to such an extent that shipments will be made daily until the big electro-chlorination plant contracted .for by the company has been placed. A large amount of work has been done on this property and in the lower levels as well as at the more shallow depths the ore is all that could be desired. Nevada Wonder, the ore vein of the latter mine has ben picked up at a depth of 40 feet. The ledge at the point where it has been cut is over 30 ft. wide and gives milling values of a good grade throughout. The Vulture Mining Co. has recovered the ore body and shipments are now being made of some unusually fine rock. The tunnel which is in a distance of 700 ft., showed some good ore but the main Vulture ledge which showed so well on the surface that has not yet been tapped. Superintendent Frank Palmer then returned to the surface and sunk a shaft to the ore. This was connected with an praise from the tunnel and the ore body was found to lie to the south of the tunnel. Work in this direction has shown a fine body of first-class ore and the crosscut is being projected further to pick up the Jack Pot ledge. History from OldCompany.com and SavingsBonds.pro (collectible Savings Bonds website)