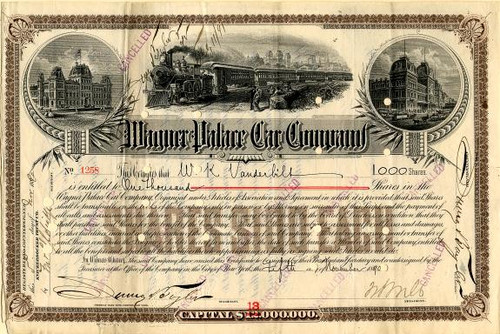 Beautiful certificate from the Wagner Palace Car Company issued in 1890. This historic document was printed by American Banknote Company and has an ornate border around it with a vignette of a steam locomotive pulling the company's cars. This item has the signatures of the Company's President and Secretary and is over 118 years old. The certificate was issued to but not signed by William K. Vanderbilt.

Certificate Vignette
The Vanderbilt family is a significant international family with Dutch origins, who were highly prominent during the 1800s because of the family patriarch Cornelius Vanderbilt, the tenth wealthiest person in history, who created railroad and shipping empires. His descendants went on to build great Fifth Avenue mansions, Newport, Rhode Island summer cottages, the infamous Biltmore House and various other exclusive homes. The family members were the leaders of the high society scene and the Gilded Age, until the early 1900s, when the ten great Fifth Avenue mansions were torn down and fellow Vanderbilt homes were sold as museums and the like. The family suffered from a major downfall in prominence by the mid-1900s, known as the Fall of the House of Vanderbilt [1]. Despite the family's downfall and major loss of fortunes, the Vanderbilts remain the seventh wealthiest family in history. Branches of the family are found on the United States East Coast as well as in the United Kingdom. A current famous descendant in the family is journalist Anderson Cooper, son of Gloria Vanderbilt, granddaughter of Cornelius Vanderbilt II. The prominence of the family was started by Cornelius Vanderbilt (17941877), the fourth of nine children born to a Staten Island family of modest means. His great-great-great-grandfather, Jan Aertszoon van der Bilt (16201705), was a Dutch farmer from the village of De Bilt, Utrecht in the Netherlands who emigrated to the Dutch colony of New Netherlands as an indentured servant in 1650. Jan's village name was added to the Dutch "van der" (from the) to create "van der Bilt" which was evolved to Vanderbilt when the English took control of New Amsterdam (now New York). Cornelius Vanderbilt left school at age 11 and went on to build a shipping and railroad empire that, during the 19th century, made him one of the wealthiest men in the world. The Vanderbilt family owned land in Corwith Township, Michigan, which was settled about 1875 . When the Vanderbilt-owned Michigan Central Railroad came through in 1880, the village of Vanderbilt, Michigan, was established. Although Cornelius Vanderbilt always occupied a modest home, members of his family would use their wealth to build magnificent mansions. Shortly before his death in 1877, Vanderbilt donated US$1 million for the establishment of Vanderbilt University in Nashville. Members of the family dominated what has come to be known as the "Gilded Age", a period when Vanderbilt men were the merchant princes of American life through their prominence in the business world and as patrons of the arts throughout the world. Some of Cornelius Vanderbilt's offspring gained fame as successful entrepreneurs while several achieved prominence in other fields such as Alfred Gwynne Vanderbilt (1877-1915), who went down on the RMS Lusitania. His son Alfred Jr. became a noted horse breeder and racing elder. Harold Stirling Vanderbilt (1884-1970) gained fame as a sportsman, winning the most coveted prize in yacht racing, the America's Cup, on three occasions. His brother "Willie K" launched the Vanderbilt Cup for auto racing. Cornelius Vanderbilt IV (1898-1974) became an accomplished writer, newspaper publisher, and film producer. However, others made headlines as a result of drug and alcohol abuse and multiple marriages. Cornelius Vanderbilt had been awarded a gold medal by the United States government during the American Civil War for donating his steamer S.S. Vanderbilt to the Union forces. Inheritance of this medal became the symbol for the titular head of the Vanderbilt family. In 1855, Commodore Cornelius Vanderbilt donated 8.5 acres (34,000 m²) of property to the Moravian Church and cemetery at New Dorp on Staten Island, New York. Later, his son William Henry Vanderbilt donated a further 4 acres (16,000 m²). A plot was kept for the Vanderbilt family in the Moravian Cemetery and several of them are buried there in the family mausoleum including the family founder. Their mausoleum was redesigned in 1885 by architect Richard Morris Hunt. Frederick William Vanderbilt's mansion on the Hudson RiverPresent-day economist John Kenneth Galbraith said that several generations of Vanderbilts showed both the talent for acquiring money and the dispensing of it in unmatched volume, adding that they dispensed their wealth for frequent and unparalleled self-gratification and very often did it with downright stupidity. Confirmation as to the validity of Galbraith's views is that only forty-eight years after the death of Cornelius Vanderbilt, one of his direct descendants died penniless. Within seventy years of his passing, the last of the ten great Vanderbilt Fifth Avenue mansions in New York City had been torn down. In 1973, the first Vanderbilt family reunion took place at Vanderbilt University. The family's modern legacy includes Vanderbilt University as well as Vanderbilt Avenue in Midtown Manhattan, which runs alongside Grand Central Terminal, the New York City rail hub built by the Vanderbilt family. Fortune's Children: The Fall of the House of Vanderbilt written by distant cousin Arthur T. Vanderbilt II, was published in 1989. History from Wikipedia and OldCompanyResearch.com (old stock certificate research service).