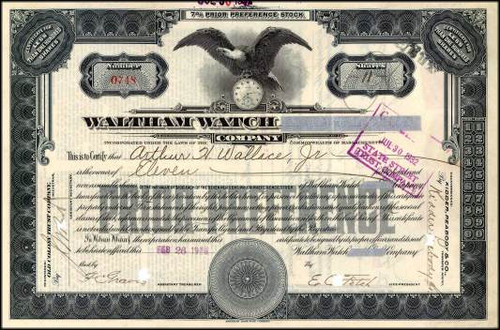 Beautifully engraved certificate from the Waltham Watch Company issued in the 1920's. This historic document was printed by the American Bank Note Company and has an ornate border around it with a vignette of an eagle holding a pocket watch. This item has the printed signatures of the Company's Officers and is at least 76 years old. 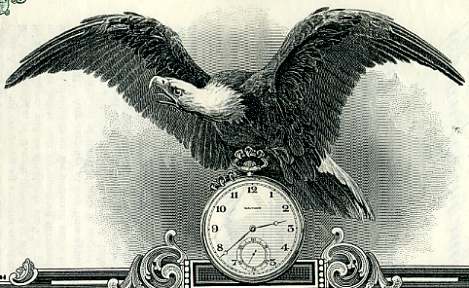 Certificate Vignette
Waltham Watch Company In 1854 the Waltham Watch Company was established by Aaron Dennison. The company went on to make the first watches with interchangeable parts and the first 100% American-made watch. The advanced machinery designed at the Waltham Watch Company spread to other industries and led to America's industrial power. The then revolutionary business plan was to manufacture the movement parts so precisely that they would become fully interchangeable. Based upon the experience of earlier failed trials, Howard would eventually perfect and patent his precision watch making machines. In 1851, the company took the name "American Horology Company" and production started in the new factory building. Late 1852, the first watches were complete. The first 17 watches, marked "The Warren Mfg Co" were distributed among company officials. Number 18 to 100 were named "Warren Boston" and the following 800 "Samuel Curtis". A few, marked "Fellows & Schell", sold for $40. The company was renamed "Boston Watch Company" in September 1853. A new factory was built in Waltham, Mass., on the banks of the Charles River, which grew over the years to its present size. In October 1854 the company moved definitely to Waltham, Massachusetts. The next movements manufactured (1001-5000) were marked "Dennison, Howard, & Davis", "P.S.Bartlett", and "C.T. Parker". Upon bankruptcy, the company was sold at auction to Royal E. Robbins, who reorganised it under the new name "Appleton Tracy & Co" in May 1857. Bearing this name, the next movements produced, 1857 models, were numbered 5001 to 14,000. Also the "C.T. Parker" was introduced as 1857 model: 399 units were made. Also 598 chronometers were manufactured. January 1853 saw the introduction of the P.S. Bartlett watch. The "Waltham Improvement Co." merged in January 1859 with the "Appleton, Tracy & Co." forming the American Waltham Watch Company, AWWCo. In 1860, as President Abraham Lincoln was elected, the country was in Civil War. Production ground to a halt. However, the company decided to downsize to the lowest possible level to keep the factory open. It worked: Upon his Gettysburg Address, President Lincoln became the proud owner of a Waltham watch: Model 1857, Grade Wm Ellery, serial number no 67613! Waltham became the main supplier of Railroad chronometers to the various railroads in America and in as many as 52 other countries of the world. In 1876, Waltham disclosed the first automatic screw making machinery and obtained the first Gold Medal in a watch precision contest at the Philadelphia Centennial Exposition. Not only the American Horology but also the world owes much to the early members of the Waltham Watch entity, such as Bacon, Church, Dennison, Fogg, H. Marsh, Webster and Woerd for their technical inventions and developments. The Waltham Watch Company has produced about 40 million high quality watches, clocks, speedometers, compasses, time fuses and other precision instruments in about 100 years in U.S.A. Each movement has been engraved with an individual serial number. The Company went out of business in 1957, upon having founded a subsidiary in Switzerland in 1954, Waltham International SA, to further Waltham as a Swiss Made Watch Brand. History from Wikipedia