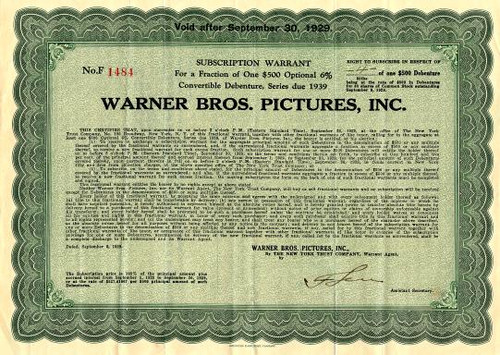 Beautifully engraved Subscription Warrant certificate from the Warner Bros. Pictures, Inc. issued in 1929. This historic document was printed by the American Banknote Company and has an ornate border around it with the company's name on top. This item is hand signed and is over 77 years old. Warner Brothers, one of Hollywood's most famous studios, was founded in 1923 by four actual brothers: Jack, Sam, Harry & Albert Warner. The siblings never seemed to get along with each other, but Warner Bros Studios managed to produce some of the most memorable movies in the history of Hollywood, including the world's first "talkie" with Al Jolson, "The Jazz Singer" (1927), "The Adventures Robin Hood" (1938), "Casablanca" (1942), "Yankee Doodle Dandy" (1942), "Cool Hand Luke" (1967), "Deliverance" (1972), "The Exorcist" (1973), "Chariots of Fire" (1981), "Body Heat" (1981), and the current string of "Batman" films. The first Warner Bros studio was located in Hollywood, on Sunset Boulevard, in what is now KTLA Television studios. The studio was built in 1919, and it was here that the world's first "talkie" was filmed back in 1927: Al Jolson's "The Jazz Singer," which put an end to the age of silent movies and revolutionized the Hollywood film industry. In 1928, with the success of that famous Al Jolson talkie, Warner Bros. moved to their current home for 70+ years at the 110-acre Burbank lot in the east San Fernando Valley.