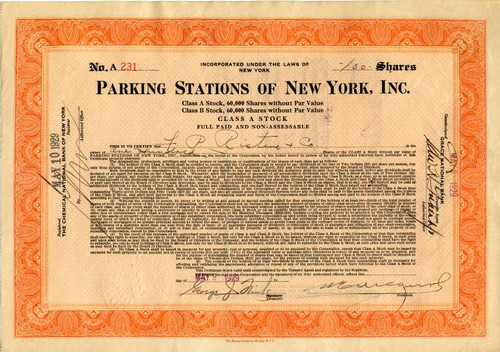 Beautiful certificate from Parking Stations of New York, Inc issued in 1929. This historic document was printed by the Broun Green Company and has an ornate border around it. This item has the hand signatures of the Company's President, William E. McGuirk and Treasurer, and is over 85 years old. 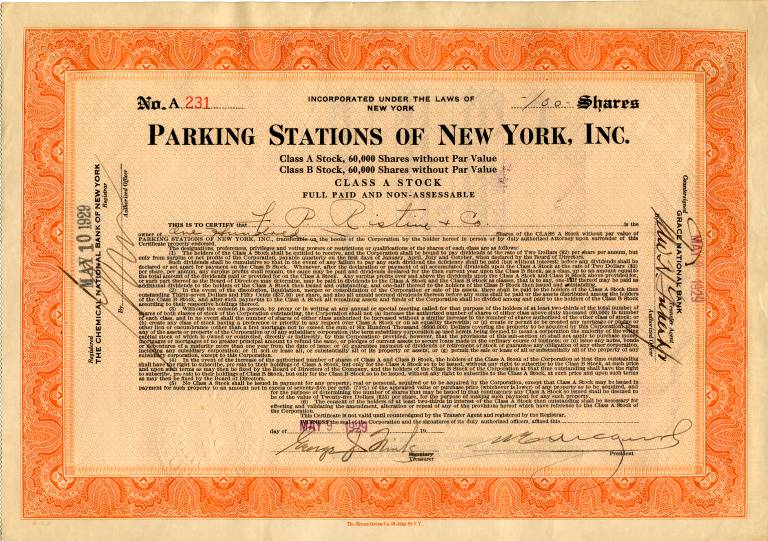 Certificate
Reported on April 30, 1929 This Evening Brooklyn's first "motorcar hotel" will be formally opened at 5 p.m. today and will be inspected by boro leaders, who will be guided through the large structure at De Kalb ave. and Navy st., by William E. McGuirk president of the Parking Stations of New York, Inc., which is operating the motor hostelry. Mr.- McGuirk, who was borh in Brooklyn and who has spent most of his life in the motor business, stated, "There is no city in the world where Intelligent handling of the parking question can be more successfully worked out than in Brooklyn." The building, which Is located within easy approach of the large department stores and the theatrical section of the boro, has 13 parking levels. All of these are reached from the street through large, wide ramps scientifically constructed and banked. When a motorcar arrives at the terminal a uniformed attendant designates the space to be occupied and tags the car.