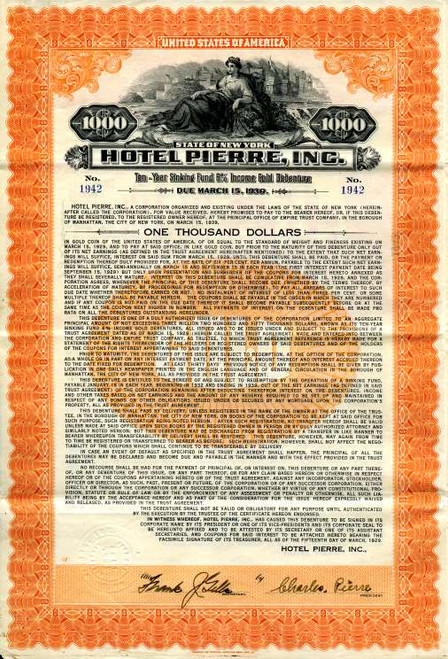 Beautifully engraved uncancalled $1000 Bond certificate from the Hotel Pierre, Inc. issued in 1929. This historic document was printed by the American Banknote Company and has an ornate border around it with a vignette of an allegorical woman. This item has the signatures of the Company's President, Charles Pierre and Secretary. 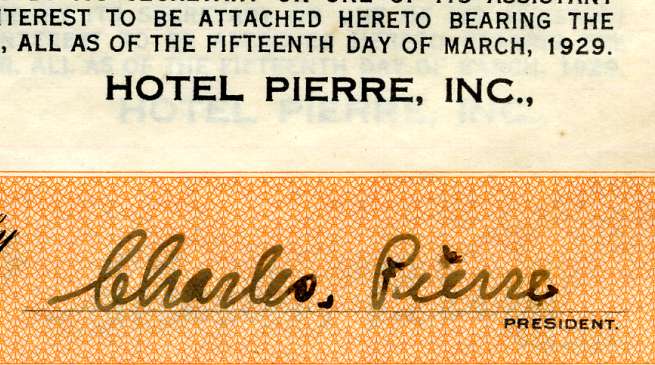 Certificate Vignette
The Pierre is a luxury hotel located at 2 East 61st Street at the intersection of Fifth Avenue in Manhattan, New York City, facing Central Park. The hotel opened in 1930, and was later acquired by Taj Hotels Resorts and Palaces of India. Standing 160 meters tall, it is located within the Upper East Side Historic District as designated in 1981 by the New York City Landmarks Preservation Commission. Charles Pierre Casalasco left his father's restaurant in Ajaccio, Corsica, where he had started as a busboy, assumed Charles Pierre as his full professional name, and began work at the Hotel Anglais in Monte Carlo. Pierre went on to study haute cuisine in Paris, and he later traveled to London where he met the American restaurateur, Louis Sherry, who offered Pierre a position. After Pierre arrived in New York as a 25-year-old immigrant, he made his first mark as first assistant at Sherry's Restaurant and became professionally acquainted with members of the Social Register, as well as newer millionaires like J. P. Morgan and the Vanderbilts. After nine years at Sherry's, Pierre left, first for the Ritz-Carlton on Madison Avenue at Forty-sixth Street, then opening his own restaurant on Forty-fifth Street immediately west of Fifth Avenue, and finally at Pierre's on Park at 230 Park Avenue. At the height of his success, dissatisfied with the increasing democratization of public manners, Pierre sold his restaurant and entered a joint venture with a group of Wall Street financiers, "among them Otto H. Kahn, Finley J. Shepherd (who had married Helen Gould), Edward F. Hutton, Walter P. Chrysler, and Robert Livingston Gerry, Sr. (the son of Elbridge Thomas Gerry, lawyer, philanthropist and grandson of Elbridge Gerry, the inventor of 'gerrymandering')". The 714-room Pierre Hotel that rose forty-two stories on the site of the Gerry mansion at the corner of Fifth Avenue and 61st Street allowed for unrestricted views of Central Park. It cost $15 million to build and opened to grand fanfare in October 1930. The hotel was designed by the New York firm of Schultze and Weaver as a skyscraper that rises in a blond-brick shaft from a limestone-fronted Louis XVI base. Its topmost floors render it an easily-recognizable landmark on the New York skyline; they are modeled after Mansart's Royal Chapel at Versailles, a system of Corinthian pilasters and arch-headed windows, with octagonal ends, under a tall, slanted, copper roof that is pierced with bronze-finished bull's-eye dormers. New York society turned out to attend the gala dinner that marked the opening of The Pierre; it was prepared by August Escoffier, "the father of French chefs", who served as a guest chef at The Pierre in its early years. As markets continued to collapse during the Great Depression, The Pierre went into bankruptcy in 1932. The oilman, J. Paul Getty, bought it for about $2.5-million in 1938 and subsequently sold many cooperative apartments in the building. The Pierre was the scene of the Pierre Hotel Robbery in 1972. Today, the hotel contains 189 guest accommodations, including forty suites, and thirteen grand suites. Dining options in the hotel include the restaurant Sirio located off Fifth Avenue and the 2E Lounge off the Main Lobby of the hotel. The Pierre came under the management of the Four Seasons Hotels and Resorts in 1981. In its 75th anniversary year in 2005, The Pierre became a Taj Hotel as Taj Hotels Resorts and Palaces, a global chain of fine luxury hotels and resorts, succeeded as the new lessee and operator. Taj Hotels is part of India's Tata Group. In 1959, seventy-five apartments were sold to a cooperative of private residents, while The Pierre's owner at that time, J. Paul Getty, retained control of the hotel's services and guest rooms. Among the permanent residents at The Pierre have been Elizabeth Taylor, Viacom entertainment-company chairman Sumner Redstone, Mohamed al-Fayed, then the owner of Harrods, and the late designer Yves Saint-Laurent. Thirteen of the apartments have since become "grand suites". A triplex co-op that occupies the top three floors was placed on the market in 2003, with a pricetag of $70 million. This 11,000-square-foot (1,000 m2) apartment features five bedrooms, four terraces, a paneled library, a wine cellar, a black Belgian-marble staircase and the hotel's former ballroom with 23-foot (7.0 m) high ceilings. It was originally purchased by the hedge-fund manager Martin Zweig, from publishing heiress Mary, Lady Fairfax, in 1999 for $21.5 million. With its $70 million price tag payable in full at purchase, the co-op was listed in 2006 in Forbes Magazine as the eighth-most expensive home in the world, fourth-most expensive home in the United States, and second-most expensive home in the Northeastern United States in 2006.[ The board of directors has turned-down two would-be buyers. The penthouse returned to the market in March 2013 for an asking price of $125 million. History from Wikipedia and OldCompany.com (old stock certificate research service)